Stalemate over payment to victims who were severely injured is ‘cruel’ 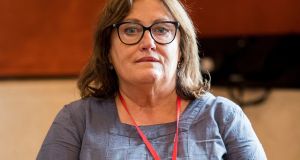 Jennifer McNern said she has felt compelled to take a judicial review to try to force payment of the pension. Photograph: Liam McBurney/ PA 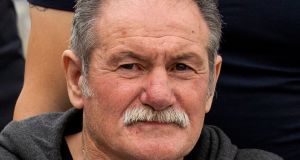 Christy Cummings after delivering a letter for Northern Secretary Brandon Lewis, expressing concern he could be denied a pension at Stormont House in Belfast. Photograph: Liam McBurney/ PA Wire

A woman who was badly injured in a bombing 48 years ago is taking legal action to try to pressurise the Northern Executive and British government to pay an agreed pension to victims who were severely physically and mentally injured during the Troubles.

The scheme, which offers annual pensions of £2,000-£10,000 for victims, was due to open last month but has been put on hold because of a stalemate involving the Executive, the British government and Sinn Féin.

There is a row over who will pay for the some £100 million scheme between Stormont and Westminster while Sinn Féin has been accused of refusing to nominate a department to operate the pension, which is necessary before it can be activated.

Jennifer McNern, who was 21 at the time, lost both legs in the 1972 Abercorn restaurant bombing. No organisation admitted the attack although it was widely blamed on the IRA.

Two young women were killed in the explosion while 70 were injured.

Ms McNern’s sister, Rosaleen, who was about to be married, lost her legs, her right arm and an eye in the explosion.

Ms McNern said she has felt compelled to take a judicial review to try to force payment of the pension.

“We have been kicked and punched down the road so far that there was no road left to go. The only avenue open to me was the courts,” she said.

“To think that everything was moving along and to be stopped so abruptly was a cruel act,” she said.

Ms McNern said she did not want to enter into the dispute over who was responsible for the hold-up. “This is just a moral thing to do for people who live continuously with serious injuries through no fault of their own,” she said.

Former Northern Secretary Peter Hain in an article in Wednesday’s Irish Times said Sinn Féin seemed “to be wilfully misrepresenting the criteria for those severely injured to be paid the pension”.

Sinn Féin, however, has rejected such claims. It argues the terms of the scheme could be used to block people from a republican background from getting pensions.

This argument was also put by former republican prisoner Christy Cummings on Tuesday when he handed in a letter for Northern Secretary Brandon Lewis, expressing concern he could be denied a pension.

Mr Cummings was paralysed from the chest down when he was shot in a Loyalist Volunteer Force attack in Dungannon in Co Tyrone in 1997, an attack that also claimed the life of Seamus Dillon and injured several others.

Mr Cummings explained that he was shot while acting as a doorman at the Glen Gannon Hotel. He said he and others prevented the LVF gunmen from entering the hotel to carry out a shooting that could have led to even higher casualties.

Separately, however, Mr Cummings served a seven-year sentence for planting a hoax bomb, a conviction he is contesting.

On Tuesday First Minister Arlene Foster said if the deadlock could not be broken, the British government had an “obligation” to step in.