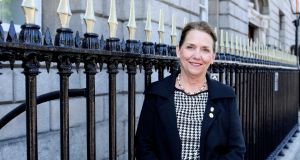 Dr Barbara Lee Bass: ‘It’s not that we want them, we need them. We want the best of the best and in our medical schools the women are in the upper half of the class.’ Photograph: Maxwellphotography.ie

Stronger efforts are needed to remove barriers and overcome the unconscious bias preventing female medical trainees from pursuing careers as surgeons, the president of the American College of Surgeons has said.

Often associated with intense hours and a high pressure environment, a career in surgery has long been considered a more natural path for male rather than female doctors.

Today, fewer than 7 per cent of consultant surgeons and 34 per cent of surgical trainees in Ireland are women, despite more than half of medical graduates being female.

However, gradual changes are being made to encourage more women to become surgeons, according to Dr Barbara Lee Bass, chair of the department of surgery at the Methodist Hospital in Houston, Texas. She was in Dublin this week to receive an Honorary Fellowship from the Royal College of Surgeons (RCSI).

While surgery is still often considered a “high-risk, high intensity, autocratic discipline” that is more suited to male doctors, Dr Bass says improvements have been made since the early days of her own career when there was “active exclusion” towards women in the field.

During her training, Dr Bass said female trainees constantly had to strive “to be better”. “We had a focus on us as the people who were likely to fail and when you didn’t fail people said someone must have helped us.”

Similar to Ireland, up to 50 per cent of students in medical school classes in the US are female while about 40 per cent of trainees are women.

However, only 11 per cent of surgery professors in US medical schools are women, according to Dr Bass. In 2017, there was only one female professor of surgery in Ireland and no female consultants in paediatric surgery.

Dr Bass recalls how male colleagues reacted after she had her first child. “There was a ripple of doubt among the men who had raised us but we showed them we could do it. To this day we’ve learned to celebrate pregnancy among our younger trainees as a chance to show we can get this person through that period and show her as a valuable asset.”

Dr Bass says the problem is no longer the conscious exclusion of female trainee surgeons but the unconscious bias that still exists when women choose to take time off work to have a child. Greater leadership, mentorship, academic advancement options, maternity and family leave policies and stronger awareness around bullying and harassment are needed to end the still widely prevalent discrimination towards female doctors, says Dr Bass.

“It’s not that we want them, we need them. We want the best of the best and in our medical schools the women are in the upper half of the class. We need women to become surgeons because we need to have enough surgeons in the country.

“There’s real strength in having surgeons who come from different backgrounds and ethnicities to enrich the profession. This is about work-life integration, it’s nothing to do with capability and skills. We still have a long way to go.”

A RCSI report published last year warned of “a striking absence of female surgeons in senior academic positions” and noted that poor working conditions during pregnancy were preventing women from progressing in their careers as surgeons.

Dr Deborah McNamara from Beaumont Hospital, who chaired the RCSI’s working group on gender diversity, called for structures that would enable surgeons to “vary the tempo of their professional life” during certain periods. She added that building a diverse medical workforce was not only about gender equality but ensuring patients receive the best possible care. The report also called for greater mentoring and fellowship options for female surgical trainees and more consideration of the needs of trainees who are parents.