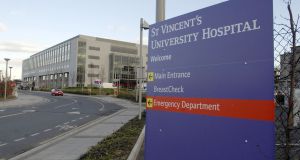 The operators of St Vincent’s Hospital, Dublin have come under fire from the HSE and the Dáil Public Accounts Committee over the payment of additional sums to senior executives. Photograph: Dave Meehan

Former chief executive of the hospital Nicky Jermyn returned to work in a different role at St Vincent’s just months after he left and was paid the money in 2014.

Mr Jermyn received a termination payment of €200,000 as well as €375,000 paid into his occupational pension fund, according to recently filed accounts of the St Vincent’s Healthcare Group.

He departed after the group came under fire from the HSE and the Dáil Public Accounts Committee over the payment of additional sums to senior executives, over and above official public health service-approved salaries, for work in its private hospital.

It emerged in 2013 that Mr Jermyn was receiving a package of more than €292,000 a year, with almost half funded by the private hospital at St Vincent’s.

According to a directors’ report in the accounts, Mr Jermyn’s contract was terminated in June 2014 due to “various factors, none of which were related to performance issues”. Acting on independent legal and taxation advice, the board agreed to compensate him for the early termination of his contract, the note states.

The €575,000 payment was fully funded from the group’s private commercial income and no public funding or donations were involved, it says.

Major changes were made to the membership of the board of St Vincent’s Hospital Group in September 2014 after which Mr Jermyn was invited to re-join the group. In December that year, he was appointed director of strategy on a fixed term contract. The note says his role is to support the new board and shareholders - the Sisters of Charity - in the development and execution of strategy up to the year 2020.

The post is funded from private commercial income and not from public sources or donations, it says.

Mr Jermyn is also treasurer of Badminton Ireland and went forward for election as treasurer of the Olympic Council of Ireland earlier this year. However, he withdrew his candidacy before the election was held.

The HSE subsequently engaged forensic auditors to review arrangements within the group. A spokesman says the audit by Deloitte will shortly focus on compliance with the public-private workload.