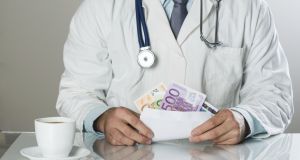 The Health Service Executive says it does not know whether any of its senior staff have received direct payments from pharmaceutical companies.

An investigation ordered by Minister for Health Simon Harris into payments by drug companies to HSE staff has failed to establish whether any took place and there is uncertainty as to whether existing rules are being followed.

Mr Harris ordered the internal review last year after claims that up to one-third of senior HSE clinicians are in receipt of money from the pharma industry.

The payments are part of a cumulative €17 million paid by the industry to doctors, hospitals and other healthcare organisations each year.

The Minister asked the HSE to assess its existing protocols and practices in relation to the receipt by employees of so-called “transfers of value” from the industry amid fears of potential conflicts of interest.

Ethics legislation requires all HSE employees at or above Grade VIII (minimum salary of €65,000) to declare an interest that could “materially influence them in the performance of their duties”.

The definition includes non-HSE income above €2,600 as well as details of paid travel and commercial positions such as consultant or advisor.

Of these, 19 were from medical consultants and three were from pharmacists.

However, no declarations of payments covered by the transparency scheme operated by the pharmaceutical industry were made.

Mr O’Brien says it is not possible to be definitive as to whether any declarations should have been made, as a declaration is a matter of personal judgement in relation to the “material influence” condition in the legislation.

In addition, it is no longer a legal obligation to return a statement of “nil” interest, he says.

“This makes it impossible to determine if persons simply did not comply with the declaration requirements in these instances or instead determined they did not have to make a return based on the ‘material influence’ conditions.”

He says processes are in place to ensure doctors and other staff are familiar with existing protocols.

“However, it is not possible to be fully assured that employers are operating in compliance with them in practice.”

1 Life in Level 3: What will happen under new restrictions in Dublin?
2 Coronavirus: From midnight Dublin will move to level three until October 10th - Taoiseach
3 Wife not entitled to deceased husband's entire estate, High Court rules
4 Michael McDowell tells Seanad he has ‘no confidence’ in NPHET
5 Gardaí investigating after woman throws smoothie over Leo Varadkar
Real news has value SUBSCRIBE