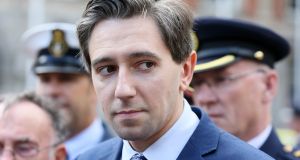 Minister for Health Simon Harris. The Department of Health papers note that “a key issue for health agencies, where unfunded pension liabilities are recognised, is the absence of a matching pension asset”. Photograph: Brian Lawless/PA Wire

Key health providers face possible insolvency in a dispute over pension liabilities in a confrontation that health officials warn could have adverse implications for Minister for Health Simon Harris.

The State’s corporate watchdog, the Office of the Director of Corporate Enforcement, is pursuing a number of agencies that are funded by the Department of Health to provide services on behalf of the HSE over the manner in which they account for the pensions of their employees.

The voluntary not-for-profit organisations – known as Section 38 bodies – “could shortly face court orders with litigation and regulatory penalties” if they continue with existing accounting policies for staff pensions, according to internal Department of Health papers.

Enforcement, which could also lead to significant legal costs and financial penalties for directors, could see the agencies becoming insolvent, the papers, which were drawn up in July for a hearing of the Dáil Committee of Public Accounts Committee, warn.

That could force the Government’s hand in providing funding for more than 25 groups providing a wide range of critical healthcare services.

The organisations involved include a number of the State’s largest hospitals. It is not known which two groups are being targeted by the regulator but both have been given a deadline of October 31st to comply.

The issue arises because these healthcare groups account for pension liabilities on the same Pay As You Go basis that applies to the HSE and other public bodies. The State pays for these pensions as they fall due.

However, because they are incorporated as companies, they are not entitled to an exemption from modern accounting rules, called FRS102, that require pension scheme liabilities to be recognised on their balance sheet. This is a requirement for all companies in the same way as any other company.

The staff employed by these Section 38 companies are considered to be public servants and are entitled to the same guaranteed defined benefit or final salary pensions as other public sector workers.

The Department of Health papers note that “a key issue for health agencies, where unfunded pension liabilities are recognised, is the absence of a matching pension asset”. Assets would mean either cash or something like a building whose value would be ring-fenced to meet the pension liability.

“Providing for the liability could lead to an agency becoming insolvent with adverse audit and financial consequences,” the internal papers warn.

The Department of Public Expenditure and Reform has stated “clearly that there are no circumstances in which the State can offer any guarantees, explicit or otherwise, regarding the future funding by the exchequer for public service pensions, the Department of Health document states.

The Comptroller and Auditor General (C&AG) has previously qualified the accounts of these statutory agencies on the basis that their Pay as You Go approach conflicts with the accounting rules. The C&AG “views it as desirable” that statutory health agencies would move towards full defined benefit liability recognition, the internal papers state.

The corporate regulator has now upped the pressure by imposing a deadline on the two agencies to act or face court enforcement.

The Department of Health papers also suggest that education institutions could also face similar problems over how they deal with future pension liabilities.