Lahinch devastated by massive storm as promenade carpark under 1.5m of water 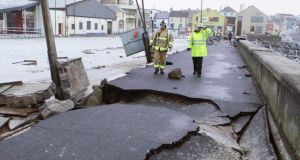 The scene of destruction at Lahinch promenade, west Clare, where massive walls and quarter-tonne wall cappings were tossed across the carpark during the storm. Photograph: Press 22

Families were forced from their seaside homes as windows and patio doors were blown in by massive waves during stormy conditions yesterday morning.

Residents of several apartments and homes in Lahinch had to be taken to safety by fire personnel and gardaí after some of the worst storms ever witnessed in the west Clare resort town.

Dozens of mobile homes and caravans were left under water after the Atlantic surged several hundred metres inland.

A fishing boat was swept up on to the pier at Seafield near Quilty, while the only access to the quay was flooded by sea water for the first time in living memory.

The worst of the storms was felt in Lahinch, where large concrete wall cappings were tossed over 50m across the main promenade car park. Signs buckled under the pressure of the storm surge, while large sections of metal fencing along the shore front collapsed.

Clare County Council said Lahinch promenade would remain closed to the public until further notice. Members of the public have been advised to stay away from the seafront for their safety.

The first alarm was raised at around 5.30am when residents reported their properties being flooded. Several homes in Saddle Lane, close to the promenade in Lahinch, had to be evacuated. A family of eight was taken to safety from their home by Fire Brigade personnel while gardaí evacuated other properties.

The main Lahinch to Liscannor road was flooded as sea water reached up to 500m inland. The promenade carpark, which is home to several surf schools, was left under 1.5m of water.

The 150-year-old building being used as a base by the Doolin unit of the Irish Coast Guard was extensively damaged. The road that leads from the rescue centre to the pier at Doolin was ripped apart.

Offices belonging to local ferry companies were lifted off the ground, with one being particularly extensively damaged.

Businessman Anton O’Looney described the scene at Lahinch as like Armageddon. The basement of his bar and restaurant on the promenade was flooded.

“I got a call at around 6am and even coming over the road I could tell how bad it was. I tried to get in and start cleaning, but the wind and waves crashing over the prom held me back.”