‘How do teachers do their job?’ – Parents share their homeschool diaries

Tens of thousands of parents are juggling jobs and their childrens learning. So, how are they getting on? 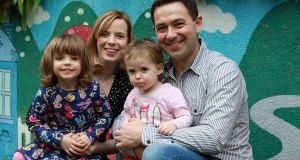 ‘My attitude is that the homework can feck off’

My attitude is that the homework can feck off for at least the first week.

I’ve five children including a fifth-year student, one in transition year and another in second year. The other two are grown up.

My second-year conveniently forgot all his books on the day that they were sent home from school, but his friends have been taking photos and sending him the pictures.

We are not doing a full day of work, and we are not trying to replicate the school day. The novelty of ‘playing school’ might work with younger children, but it’s not going to fly with teens.

But neither have we been sitting around. We downloaded Duolingo to help the kids with their school French, and we’ve all been learning Spanish for the first time. We’re doing jigsaw puzzles: I didn’t realise how hard they are, but also quite therapeutic.

We’ve been learning poetry off by heart, and did a bit of Seamus Heaney the other day. My fifth-year boy has worked out a plan for himself that involves exercise and school work. The school have been great and they’re sending on work for the class to get on with.

We are lucky to have a back garden. We’re having a skipping competition on the decking, and there’s a trampoline. They can’t play football but we have a toilet roll we are using for the keepie-up challenge.

As a parent to teens, it is a long day. There is no way I am getting them up at 9am for school work, they can get up at 10am and then start, and they can stay up later at night.

‘We just play and try to keep some structure’

We’ve three children under five and Ali is our eldest. Her sister Emma is now out of playschool, which I’m a bit sad about.

I’m at home with the girls anyway and Ben is working from home. I’d find it hard to teach Ali even if I was trying, with a two-year-old grabbing the pencils and papers and making the other girls cry.

So I am doing what I can, mostly phonics and numbers. I’m not a teacher and it’s not about getting to learn as much as trying to put some structure on the day.

In the morning we pretend to go to school and we might do some colouring in before I have a “yard break” for them and a cup of tea for me.

Alison likes to be with me but tells me that teacher is not allowed in the yard, which is great!

After that, we just play and try to keep some structure. They seem to be fine. They ask when school will be open. I tell them about the virus and that we have to be careful. We’ve had Skype dates with nanny and pops as well as some of their school friends.

Because of Ali’s allergies – she has a very severe dairy allergy – our kids are used to hearing no, which makes them chilled enough about restrictions on where they can and can’t go. We ‘ve adjusted to an existential terror before and we can adjust again.

‘It’s a lovely thing to read to your children . . . so often we don’t have time’

I’ve homeschooled my daughters over 15 years. There has never really been a timetable for us, but life has its own structures. I need to follow my philosophy – you’re always learning. There was a home structure and children, when they are young, wake up early.

Numeracy was taught but it wasn’t taught in the conventional sense – we never had a curriculum book. We are obviously counting, in cooking we are measuring, we are working out the prices of things and in sales the percentages of things.

Trust that children will always be learning even if they don’t appear to be. You can’t stop them.

Do what you like to do – if you like playing the guitar, try and do that and be a role model of learning yourself. Most children want to do what their parents are doing.

It is a lovely thing to read to your children and so often we don’t have time. It’s more than just being about the book. When there is love and emotions involved the learning is just boundless.

When it is the opposite, like “sit here now and just do the page”, that is just so stressful for both parent and child and the learning won’t happen.

The school sent home guidelines and exercises to complete. I’ve looked ahead at the two weeks and broken up the work across ten days. We start at nine with a view to finishing at 12 with two breaks in-between.

On Friday morning I did literacy and comprehension, followed by maths and followed by little things like tables.

You need to make sure you are prepared, and everything is set up before you start. Books out, pencils out, pencil parers out. Try to create no distractions, so the rhythm isn’t interrupted.

Once you’re prepared it becomes more straightforward. It’s difficult keeping Charlie (junior infants) tuned in because of his age, but he is doing his best. It’s a little more challenging because of the age difference between them.

If Charlie was a little bit more used to school, it might be a bit easier. His tasks are everything from playing eye spy, to doing a jigsaw, to spot the difference,

Tom (third class) has a project to do on Peru, which is good because there is a variety of stuff to do, it’s not the same work every day.

At first, they resisted it a bit because they thought this was going to be a holiday, but they have come around.

Even though it’s a little shorter than the school day it’s probably that little bit more intense.

‘How do teachers do their job? ’

When the schools closed there was a rush of free ebooks, resources and apps. It was amazing at first but then it got a bit overwhelming. Which bit should I pick? Should I use all of these apps?

My son is in first class, and my daughter is in a naíonra. The school has an app which gives the work to be done for the day. It’s not a huge amount – just a little bit more than homework. They’ve made it clear it’s just to keep in touch and not intended to take up the day.

How do teachers do their job? The idea of doing this in a classroom with 28 kids or more is scary. We sat down and did a rough timetable, just to give structure to the day and so the kids don’t constantly wonder what is next.

The day begins with ten minutes of exercise, just to get the blood pumping. Then it’s on to the school-assigned work, and while my son is on his Irish or maths, I give my daughter some play-dough.

We definitely plan to take a break from the school work over what would have been the Easter holidays.

At the moment, I think kids are as anxious as their parents. We can only say that, yes, it is weird, and we are a bit worried too. We don’t want to put too much pressure on anyone. If there’s a day where you don’t want to do your Irish homework, and just want to lie on the floor and play Lego, that’s okay too, because you’re a kid and this is a bizarre situation.