Dublin’s school of rock, where the teachers play with Delorentos and Villagers

At DIT’s school of commercial modern music, real-world musicians teach students in all aspects of music-making, along with the business side 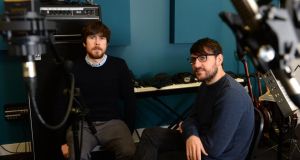 Is it distracting when your lecturers are world-famous, chart-topping musicians? Earlier this month, students at the British and Irish Modern Music Institute (BIMM) in Dublin couldn’t believe their eyes when Hozier paid a surprise visit to talk about life as a musician.

He’s the most high-profile name to give a masterclass at BIMM Dublin so far, although not the first: previous guest teachers have included Imelda May (who is about to lend her name to a new BIMM scholarship), Danny O’Donoghue of The Script and Smashing Pumpkins drummer Jimmy Chamberlin.

The real appeal of BIMM Dublin, however, lies not in the occasional visiting celebrity, but in the real-world experience of the working musicians who teach there daily. These include singer-songwriter Cathy Davey, All Tvvins frontman Conor Adams, musicians from Villagers, and members of both James Vincent McMorrow and Hozier’s bands. One tutor, Sarah Lynch, has played with Mumford & Sons, members of The Strokes and Ed Sheeran.

Kieran McGuinness is a vocalist and guitarist with Dublin four-piece Delorentos, who won the Choice Music Prize in 2013 and have been nominated again this year. He is also, along with his bandmate Rónán Yourell, a tutor at BIMM Dublin, teaching live performance workshops and artist development. Delorentos have had significant international success and recently signed with Universal Records to release their fifth record, the critically acclaimed album Night Becomes Light.

“I was initially sceptical of places like this,” says McGuinness. “But I quickly saw BIMM is about getting people from the music industry to help and guide upcoming musicians. If this place had been here when I was 18, I would have come here, no doubt.”

Hasn’t streaming and illegal downloading made a sustainable career in music increasingly difficult? “Life is long,” says McGuinness. “It’s the longest thing you’ll ever do, so you can either spend it doing something you don’t want and maybe making money, or spend at least some of your life doing something you want to do and at least trying to make money. There are jobs in the industry. This might not always be as the next Prince or Lady Gaga, but there will always be work for talented musicians, whether as a session musician, as a teacher or giving grinds, with a cover or wedding band, or as a gigging stand-in. There are hundreds of ways to do it.”

BIMM Dublin, a part of Dublin Institute of Technology, started off in 2011 as an offshoot to the hugely successful Brighton Institute of Modern Music, which has spawned stars including James Bay, Marina Diamandis (of Marina and the Diamonds) and The Kooks. It has a panel of about 40 tutors, and it takes pride in the fact that they’re all working musicians. When a tutor is on tour or working on a new recording, there’s always someone who can step in and take over. Some may teach an hour a month, others six hours a week. The main degree course is a BA in commercial modern music, accredited by DIT. Students choose vocals, songwriting, guitar, bass or drums. Entry is competitive, with 700 applicants vying for about 150 places. Students spend a significant amount of time learning about the music industry, and there’s a big focus on business as well as musicianship, performance workshops and artist development. Like in any other third-level, students complete assignments and exams.

This is where James Byrne, drummer with Conor O’Brien’s Villagers and a music business tutor at BIMM, comes in. Byrne, who also runs record label Any Other City, joined his first band, Deputy Fuzz, when he was just 15. He has drummed with Dublin band Life After Modelling, presented a Phantom 105.2FM radio show, and currently plays with Women’s Christmas. “Everyone who teaches here still works in the industry,” he says. “That’s important, because the industry has changed so much over the past five years, and it changes again every few weeks.”

On his label, Byrne has released records by James Vincent McMorrow, Villagers, and one of the hot tips for 2015, Dublin fourpiece Girl Band, who recently signed with Rough Trade Records. And Byrne has lost money. “Yeah, I’ve lost more than I’ve made, but that’s all part of it,” he says cheerily. “Girl Band’s release did cover costs and it helped the band develop. I’m hoping the same will happen with another one of my acts, Jetsetter. It took me a few turns to get it right. Some bands fall apart and some break up, or it doesn’t happen for various reasons. That can be kind of heartbreaking, but you learn from it. I’m on a small level, but I want to find great bands that want to work with me, and help them grow.”

It’s worth remembering that the Dublin college is still in its infancy, with the first graduating class set to get their degrees later this year. Both McGuinness and Byrne have been impressed by some of the talent that is starting to emerge.

The college holds two showcases each semester, one focused on original material and one on covers. Students from the college are putting on songwriting nights in Dublin. On a stroll down Francis Street, it’s common to see BIMM students with guitars; over pints in Fallon’s pub, they mix and form new bands. Just around the corner from BIMM is the National College of Art and Design, and students from the two colleges have worked together on a number of collaborations. With the Digital Hub just around the corner, Dublin old Liberties area is being turned into a hive of creativity and innovation. Students, keenly aware that many young people now consume their music through YouTube, are also working on collaborations to create videos to accompany their songs.

“BIMM offers a really positive form of hothousing,” says Byrne, pointing to current students including singer-songwriter Maria Somerville, a band called Pockets and several session musicians with Dublin group Planet Parade. “They’re not sitting around waiting for the four-year degree to end before they start working as musicians. I tell the class to get out there now, be active. Do it now.”

It’s only a matter of time before an enormously successful band emerges from BIMM Dublin, says McGuinness. “They’re mostly young and beginners – although there are some very talented mature students here – but you can see how much they have come on. They’re developing critical thinking, teamwork and interaction skills and technical expertise.

“I see many of them changing from shy kids to confident adults, learning to perform. As a musician, you have to leave so much of yourself in front of people. This course is good at helping people to discover their own style and become the musicians they want to be.”

Isn’t there a risk young musicians who have grown up watching shows such as The Voice and The X Factor will take a turn that’s wrong for them? Byrne says that may be the right route for some. “But if they’re in BIMM, it’s not all their doing. What’s important is to take advice and make a balanced decision. It’s good to have ambition. You need to be a risk-taker to succeed.”

BIMM also offers a new BA degree course in music event management and a BA degree in music production, both validated by the University of West London. Applications via bimm.ie by July 31st