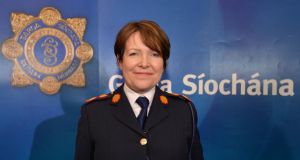 Nóirín O’Sullivan, Garda Commissioner: “It is a matter of regret to An Garda Síochána that . . . nobody has been brought to justice for that crime. It remains an ongoing, live and open investigation.” Photograph: Alan Betson / The Irish Times

The investigation into the 1996 murder of Sophie Toscan du Plantier is still “live and open”, said Garda Commissioner Nóirín O’Sullivan.

She said the force will recruit more data analysts to strengthen the investigative capabilities that were central to the conviction of Graham Dwyer.

Speaking at the annual conference of the Association of Garda Sergeants and Inspectors (Agsi) in Trim, Co Meath, Commissioner O’Sullivan rejected its criticism that she viewed the association as a “nuisance” and had shown disrespect in failing to consult it on policing reforms.

“Absolutely not,” she said. “I don’t see any of our members as a nuisance and I think I’m on record from the very first day saying that we will engage with all of our people.”

She said a wide-ranging programme of reform was under way and when the strategic transformation office spearheading it was fully operational, communication between it and all Garda members would be a priority.

She said while the Garda was praised following the conviction of Dwyer for murder, she was conscious there remained a family grieving for Elaine O’Hara.

And while a jury had rejected accusations by Ian Bailey that gardaí had conspired against him when investigating Ms Toscan du Plantier’s killing, the case remained unsolved.

“It is a matter of regret to An Garda Síochána that . . . nobody has been brought to justice for that crime. It remains an ongoing, live and open investigation.”

She believed the investigation of Dwyer, a 42-year-old architect, for the murder of Ms O’Hara underlined the professionalism of the Garda’s investigative work.

She said Garda James O’Donoghue had shown great tenacity in investigating the provenance and significance of the items found in Vartry Reservoir and Garda Bríd Wallace and Sgt Alan Browne had “trawled through absolutely tonnes of very horrific footage”.

Civilian analyst Sarah Skedd had done excellent work in analysing the data on the phones linked to Dwyer that proved central to the investigation, she said.

“I think it’s an excellent example of the fusion of what I would call good old-fashioned police work,” she said. “I would like to see far more data analytics being used and we’re currently . . . looking for new analysts.”

These would help in the presentation of often complex data in an “understandable manner” to juries in major trials.

Commissioner O’Sullivan said the McGinn report into a Garda review of the investigation into the killing of Fr Niall Molloy in Clara, Co Offaly, in 1985, vindicated the review team.

“But that doesn’t bring us any comfort,” she said. “If any new evidence comes to light it will be pursued. It’s only fair to say . . . it’s probably not right to hold out hope 30 years later.”

1 Irish planning for no-deal Brexit to restart as EU-UK talks go badly
2 Covid-19: Two-week quarantine period for arrivals into State could be lifted for some
3 Miriam Lord: Taoiseach is trapped in a Zoom session from hell
4 The momentum behind calls to ease lockdown may become irresistible for politicians
5 All students will not return to school even if social distancing rules are relaxed – McHugh
Real news has value SUBSCRIBE