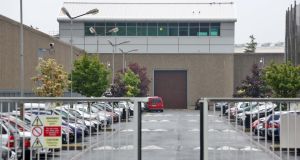 Criminals have used a remote control helicopter drone to smuggle drugs into one of the State’s largest prisons, Wheatfiled in west Dublin. Photograph: Colin Keegan/Collins. 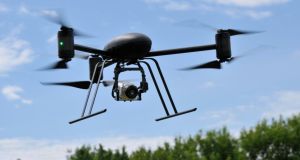 Criminals have used a remote control helicopter drone to smuggle drugs into one of the State’s largest prisons.

Criminals have used a remote control helicopter drone to smuggle drugs into one of the State’s largest prisons.

The small craft was fitted with a camera to enable whoever was controlling it from outside the prison walls to monitor its exact flight path and also see where the intended recipient of the drugs was on the ground before lowering the four-rotor drone into the prison exercise yard.

The incident occurred at around 11am yesterday at Wheatfield Prison in west Dublin.

“It looks like there was drugs packed onto it hanging by a string,” said one source.

“Whoever was flying it intended to hover it as low as they could into the yard and that the prisoner the drugs were intended for would take the drugs off the string and the helicopter would fly away without ever landing.”

However, the ‘quadcopter’ hit wires placed over the yard to prevent large helicopters from landing to aid prison escapes and fell to the ground as a result.

While prisoners rushed towards it and grabbed the drugs before prison staff could get to them, the helicopter was damaged beyond being able to fly again.

However, the blades continued to turn and at least one prisoner made unsuccessful efforts to get the drone airborne again so it could not be seized by staff.

One prisoner, suspected as being who the drugs were destined for, has been placed into solitary confinement, as have a number of others who rushed to grab the drugs when the device crash landed.

Prison officers who were watching the yard at the time believe the prisoners may have concealed the drugs internally.

“It’s not pleasant to say, but they either swallow the stuff wrapped in plastic and get it back when it comes out the other end, or they stuff it up the other end in the first place,” said one source.

The Irish Times understands the prisoners will be monitored in a solitary confinement cell until the drugs are surrendered.

Prison sources said the drone could be seen hovering over the yard for a period before it was lowered in and struck the helicopter wire, and that staff were on alert and ready to intercept it.

The drone and camera have been surrendered to the Garda and an SD card from the camera, which potentially contains a lot of data on the use of the drone, is being examined.

A spokesman for the Irish Prison Service confirmed an incident had taken place. He said the matter was being investigated within the prison and by the Garda and that a number of prisoners would face disciplinary action.