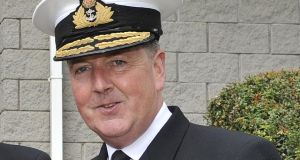 Rear Admiral Mark Mellett DSM, who has been nominated for appointment as Defence Forces chief of staff.

Minister for Defence Simon Coveney has nominated Rear Admiral Mark Mellett DSM for appointment by the President as chief of staff of the Defence Forces.

Rear Admiral Mellett was appointed to the position of deputy chief of staff of the Defence Forces in November 2013.

He will succeed the current chief of staff Lt Gen Conor O’Boyle when he retires in September this year.

Mr Coveney congratulated Rear Admiral Mellet on his new appointment and said that he is looking forward to working with him in the future.

Rear Admiral Mellett was awarded the Distinguished Service Medal (DSM) in 1994 in recognition of the role of his ship, the LÉ Orla, in detaining the “Brime” drug smuggling yacht.

He was only the second member of the Naval Service to get this honour.

He has held a broad range of positions in naval headquarters, and prior to his appointment as flag officer, he was officer commanding naval operations command.

He was a founding member of the Irish Maritime and Energy Resource Cluster and a member of its governing authority, and helped to promote enterprise, job creation and innovation in the maritime sphere,

He completed a PHD in political science from the NUI Galway in 2009 and has been a visiting professor at Liverpool Hope University.

He is graduate of the US Naval War College, the Irish Command and Staff College and the Royal Naval College, Greenwich.

He is married to Liz and has four children: Laura, Sean, Lisa and Patrick.