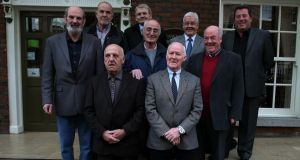 A number of the surviving ‘Hooded Men’ who hope the Government will apply to the European Court of Human Rights over their human rights case. Photograph: Brian Lawless/PA Wire

Several men seeking the reopening of their landmark human rights case over controversial interrogation practices by the British army in Northern Ireland are “heartened” the Government is taking their case seriously, the High Court has been told.

Ronan Lavery QC said he understood the Government may issue a decision today whether to apply to the European Court of Human Rights for a revision of that court’s 1978 decision that the treatment of the men in 1971 amounted to “inhuman and degrading” treatment but did not constitute “torture”.

The British government, while denying before the ECHR this treatment was torture, has since admitted that similar treatment in Kenya in the 1950s was torture and has apologised for it in that country, the men say.

They are known as “the hooded men” because hoods were placed for prolonged periods over their heads during indefinite detention at Ballykelly British army base in Derry in 1971. They were subjected to other sensory deprivation and exposure to white noise; sleep, food and water deprivation; and were forced into stress positions.

Their legal action, aimed at compelling the Government to make a decision on reopening the ECHR case before the December 4th deadline for such an application came before the president of the High Court, Mr Justice Nicholas Kearns, on Sunday.

Under the rules of the ECHR, a revision application must be made within six months of new information coming to light. Last June, new information emerged in an RTÉ programme entitled The Torture Files which revealed that evidence produced to the ECHR on behalf was deliberately misleading.

Mr Lavery, for the men, said an affidavit filed on behalf of the State had given his clients “considerable comfort” as it stated the matter had been given “careful and serious consideration”.

Mr Justice Kearns said that while it was clear the men were seeking a positive decision that their case would be reopened, he considered the matter should be postponed until after a Government decision was made.