Criminals will be forced to give DNA sample under new legislation 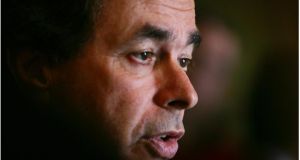 Minister for Justice Alan Shatter: the new Criminal Justice (Forensic Evidence and DNA Database) Bill is set to be published by the Minister next Tuesday. Photograph: Bryan O’Brien/The Irish Times

Criminals convicted of serious offences will be required to submit a sample of DNA which will be retained on a centralised database to aid the Garda in solving future crimes, under new legislation.

The new Criminal Justice (Forensic Evidence and DNA Database) Bill is set to be published by Minister for Justice Alan Shatter next Tuesday after it was approved at yesterday’s Cabinet meeting. The move follows repeated broken promises by successive governments on the creation of a DNA database, which is in operation in a large number of countries in the EU and farther afield.

DNA evidence can currently be used to link suspects to crimes and has solved hundreds of cases. However, gardaí must first identify the suspect on strong grounds before they can demand a DNA sample to cross-check against the DNA collected at a crime scene. Currently, samples cannot be retained for checking in future crimes. If a database existed, a DNA sample gathered from a crime scene or, for example, a gun, could immediately be checked against those many samples stored.

Database
The creation of the database follows more than 10 years of legislative reform aimed at strengthening the Garda’s hand in dealing with criminals. These have included the use of hearsay evidence in some trials, the power to detain suspects for periods of up to a week without charge, and the ability to plant electronic bugs and use in court the evidence they gather.

One informed security source said while the use of DNA databases in other jurisdictions had been used to catch sex offenders who left samples at the scene of a crime, they are also useful in tackling gangland criminals: “If they left a piece of clothing behind, if a balaclava is found in a getaway car they tried to burn out, then [the database] comes into its own, especially in cases where there is no idea who might have been involved. It can throw up a suspect and it might save time in ruling out another suspect.”

It is likely that human rights groups will campaign against what they would see as any overly intrusive elements to the law. However, Garda sources said many cases have been frustrated because DNA samples collected at crime scenes could not be checked against a database.