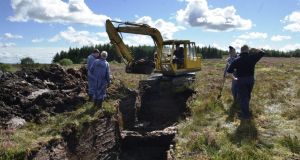 A woman who buried her brother four decades after he was murdered and his remains hidden by the IRA has made an emotional plea for fresh details about other missing victims.

Kevin McKee’s remains were recovered with Seamus Wright’s in a shallow grave near Coghalstown in Co Meath in September — 43 years after he vanished.

His sister Phil said the pain her family lived with throughout that time has been indescribable.

“It was a horrible life and we had to watch our mother turn from one person into another one,” she said.

“That’s why our first reaction to the news that he had been found was great relief.

“People who haven’t been through this might find it strange that that’s how you react when it’s confirmed that your brother is dead. But that’s what it does to you.”

Speaking ahead of the annual Silent Walk by families of the Disappeared, Ms McKee urged anyone with information on the four outstanding cases to contact the Independent Commission for the Location of Victims’ Remains (ICVLR).

“In the last year the Megraws have got Brendan back, the Wrights have got Seamus back and we’ve got Kevin,” she said.

“I hope and pray that the four families still waiting will get the phone call that meant so much to us.

“If anyone has any information please give it to the ICLVR.”

To date, the ICVLR has recovered the remains of 12 people abducted, murdered and secretly buried during the Troubles.

For the last nine years, families of the so-called Disappeared stage a walk on All Souls Day to mark the plight of those who have yet to have the remains of their loved ones returned.

At Stormont, a black wreath containing white lillies to represent those who have yet to found will be carried by Anne Morgan, sister of Mr Ruddy who disappeared from Paris in 1985 and was murdered by the INLA.

Two lillies representing Mr McKee and Mr Wright will be removed from the wreath during the short ceremony.

Oliver McVeigh and Dympna Kerr, who last week made another appeal for information about their brother Columba, with Maria Lynskey, niece of Mr Lynskey, will be among those taking part.

Father Gerry Reynolds from Clonard will lead prayers before the Walk.

Sandra Peake , of the Wave Trauma Centre which supports the families, said they literally had to suffer in silence for years.

“Now they have a voice and a collective strength which this walk symbolises with those who have had their loved ones returned and those who have not remaining united side by side in mutual support and solidarity,” she said.

“They all want the same thing. That information that will lead to recovery of all the remains comes forward to the ICLVR so that this suffering can be brought to an end”.