Alan Dukes was ‘threatened’ after bank took over Quinn business 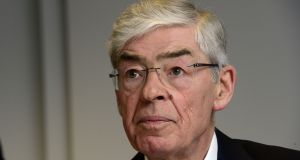 Former IBRC chairman Alan Dukes said those behind the intimidation warned of ‘various disobliging things which I’d rather not go into’. Photograph: Cyril Byrne / The Irish Times

Former government minister Alan Dukes has said he was personally threatened while chairman of the Irish Bank Resolution Corporation (IBRC), after it took over the Quinn group.

Mr Dukes said both he and Mike Aynsley, then chief executive of the rebranded lender Anglo Irish Bank, got “very threatening” communications over their role in trying to rescue the Quinn businesses from the cusp of collapse.

“That whole process of sabotage began very shortly after we took over the company,” he told RTÉ Radio One’s The Business.

“There were various threats, some of which were not carried out at the time, to do things. That happily didn’t happen.”

Mr Dukes, one-time leader of Fine Gael, declined to detail the exact nature of the threats, saying only that they warned of “various disobliging things which I’d rather not go into”.

More low-level interference continued “right up to the time the [IBRC] stopped being involved in the issue.”

On the savage attack during the week on Kevin Lunney, a top executive of Quinn Industrial Holdings (QIH), Mr Dukes said it was “entirely deplorable”.

“Sabotage and various kinds of attacks have been going on for some years,” he said.

“It has reached now, with the attack on Mr Lunney, an absolutely frightening level.”

Mr Dukes said the “whole problem” is that “quite a number of people in the locality have never accepted the economic reality” that the entire Quinn empire in early 2010 “was just on the brink of extinction”.

“It was necessary for an outside agency to move in, it happened to be the bank, Anglo Irish Bank as it was at the time, to find a way of keeping the group alive if it were possible to do so,” he said.

IBRC spoke to community representatives on a number of occasions to explain the rationale for their strategy to rescue the companies, and “some of them argued back on the basis that Mr [Seán] Quinn was the only person who could run the business.”

“We clearly didn’t agree with that,” said Mr Dukes.

“It seems there are a group of people outside the company who are acting totally contrary to the interests of the workers and the community there, in order to achieve some other kind of goal, which is not specified,” he added.

“The really frightening thing is, that they now seem to be prepared — almost literally — to stop at nothing. The result of what they are doing, if they were successful, would be to destroy the company and to destroy a very large amount of employment in an area that desperately needs it.”

Mr Dukes said QIH now enjoys a “quite solid” business outlook and is “doing so well”.

Those behind the attack on Mr Lunney and other attempts to harass management and workers “should realise that the only result will be to damage their community and the future of their children” and that it is “totally immoral”, he said.

Mr Dukes praised the “extraordinarily courageous” management and staff at QIH and warned the border community around Derrlylin, Co Fermanagh and Cavan they need to be conscious of the “dangers that are there”.

On Thursday, Mr Quinn condemned the attack on Mr Lunney as “barbaric” during an interview with regional radio station Northern Sound.

“Any proper individual with a sense of morals would condemn that,” the businessman said.

“My family is outraged as well and they fear that we will take flack for this.”

Mr Quinn said “these guys sacked me over three years ago” and he had not been involved in the company since then. The attack “just doesn’t make any sense, that’s not what moral individuals do to each other.”

The PSNI and the Garda are conducting a major cross-border inquiry into the attack of Mr Lunney.

Mr Lunney, who is QIH’s chief operating officer, was abducted near his home in Derrylin as he returned from work at 6.40pm on Tuesday and his car was set on fire.

He was found more than two hours later approximately 35km away at Drumcoughill, Cornafean, in Co Cavan, badly injured and dumped on a roadside after being beaten with a baseball bat.

Some of his fingernails were pulled out, his face and neck slashed with a Stanley knife and his leg badly broken during the two-hour ordeal.

It is understood that Mr Lunney had been due to attend a meeting of QIH directors and its US hedge fund financial backers on Wednesday.

It emerged on Wednesday that he was among five senior executives and company directors recently named in an anonymous letter that threatened “a permanent solution” against them.

The letter, received in May, was treated as a death threat by QIH, which passed it on to the Garda and the PSNI.