Balancing headiness and healthiness on holiday in New Orleans

Famed cuisine, music and nightlife fizzes to the rhythm of a city that really never sleeps 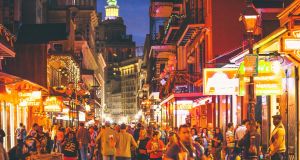 Bourbon Street is a hive of activity every night of the week, with live bands in every bar and children on the neon-lit streets bucket-drumming. Photograph: iStock

New Orleans’s famed cuisine, music and nightlife stirs, soothes and fizzes to the rhythm of a city that really never sleeps. Go for a week and your senses will be enriched, but your body won’t be thanking you.

Could you have your cake though - or rather your beignet - and eat it? Well that was the plan. Enjoy a week of New Orleans’ finest, while still striking a reasonably healthy balance.

The city’s traditional downtown and uptown – or the classic French quarters and modern American quarters – meet on Canal Street, which is just a five-minute stroll from the Ace Hotel. So it’s the perfect location from which to walk to anywhere in the city.

Greeting me on arrival there was a delicious chocolate chip cookie, served warm with a hint of sea salt. I’m usually very disciplined when it comes to sweet snacks, but this became a twice-daily treat during my stay. You can even get them brought up to the heated pool and bar on the rooftop, to accompany the stunning views of the city.

That’s where our first evening began, before escalating on to the famous Bourbon Street. This place is a hive of activity every night of the week, with live bands in every bar, and children on the neon-lit streets bucket-drumming (more for practice than payment in this music-mad city) as onlookers enjoy the atmosphere in the warm air under the French quarter-style balconies.

Dotted in the side streets you’ll find bars like the Alibi, serving food and drink 24/7. Even in the early hours you’ll easily get your hands on some traditional New Orleans dishes such as gumbo and jambalaya. Both are combinations of meats, rice and vegetables, but add some Creole magic and they taste far too good to be healthy.

On day two we visited Cochon in the warehouse district. Their cajun-southern menu stirred every taste bud and uncovered a few more. The name of the restaurant is the French for pig, and with their sister spot Cochon Butcher next door, the pork produce is all locally sourced and tastes incredible. But there's great variety to their menu and along with the fried boudin with pickled peppers, my two standout dishes were the fried alligator and the wood-fired oysters.

Matthew Ghabrial and his staff in Cochon sent me on my way with a list of recommendations for food and fun in the city. Totally unprompted. The people in New Orleans are always looking to help you out; they’re warm, chatty, and they listen. After flying in via New York, it hits you pretty early on that this is an American city like no other, “The city that care forgot”. And they’re damn proud to be different.

The locals are also a lot of fun, and at the heart of that fun is their music. To counter two days of finger-licking food, washed down by the classic New Orleans Sazerac cocktails, I headed for a dancing workout with the “Move ya Brass” crew. Founded by singer Robin Barnes, when she was forced to revaluate her lifestyle after suffering a serious kidney infection, the class teaches New Orleans bounce moves in an aerobics format.

Dancing along the Mississippi river, with the sun going down over the city’s skyline in the backdrop, you’ll smile and laugh your way through an hour of good cardio, realising that nothing makes this unique city tick like music and a sense of community.

The healthy buzz continued the following day, when, rather than exploring the New Orleans swamps on an airboat, I did so on a kayak. The New Orleans Kayak Swamp Tours provided transportation to the Manchac swamp, which is a little over an hour’s drive from the city. The waters here are calm and ideal for beginners – though after 2½ hours you’ll feel a few aches.

There’s an array of wildlife to see along the way; I caught a glimpse of an eagle and a vulture - no doubt something to do with the alligators. Our guide assured us they’re only small and more afraid of us than we should be of them; but I didn’t know whether to be disappointed or relieved that we didn’t get to test his theory.

With energy levels waning after an active morning, some sugary goodness in Café Du Monde was well timed. Their beignets – a donut-like pastry – are world famous. A scenic jaunt from here is Frenchman Street, where for the price of a drink you can stop in anywhere and hear the most talented musicians. This is where all the locals hang out. For all of the energy of Bourbon Street, this is authentic New Orleans and makes for a really unique night out.

The next morning I went for a run in the beautiful New Orleans City Park. It's 50 per cent bigger than Central Park in New York, and contains a 400m running track – perfect for some interval runs, which I prefer to long distance while on my travels. Less chance of getting lost.

Dinner that evening was served at the Seaworthy restaurant, next door to the Ace Hotel. Here, the waitress explains, they serve “wild-caught seafare with a southern spin”. Tell anyone around the city that you’re having dinner here and they’ll rave about the oysters; they do not disappoint. But it was the octopus, served in eggplant salsa, pumpkin seed and chipotle sherry vinegar which was most memorable.

The next day I moved location to the Maison Dupuy, a boutique hotel in the heart of the French quarters named as one of the best hotels in the world in the Conde Nast Gold List, to a room overlooking the swanky courtyard. There’s also a heated pool and this one was long enough for a few lengths. Rather conveniently, Bourbon Street and Frenchmen Street were a short walk away.

Just around the corner too is the FreeWheelin’ Bike Tours meeting point, which was handy for an early, groggy start the following morning. In three hours of cycling around the city you begin to understand its layout, get a history lesson, and visit less touristy areas such as Treme, the oldest African-American neighbourhood in the United States.

New Orleans is the birthplace of jazz, and at Preservation Hall they consider themselves the keeper of the traditions of old. There was no better place to begin my last night in the Big Easy. You must arrive well in advance to guarantee entry, and have a drink beforehand as they are not served inside. There are no gimmicks here, phones are banned, just sit (or stand) and enjoy. Each song is a story – with each band member assigned their own chapter – that’s well worth staying with to the end.

The next day was the end of my journey, but not before I got in one last bit of exercise. The late nights and activities caught up on me eventually, and sleeping in meant having to sprint through the terminal to just about catch my plane.

Moral of the trip? Eat all the beignets you want, and work them off later.

Get there
There’s no direct flight from Ireland to Louisiana. I travelled via New York with Norwegian and then Spirit Airlines to New Orleans.