Our Wedding Story: A ‘Wedfest’ in Westmeath 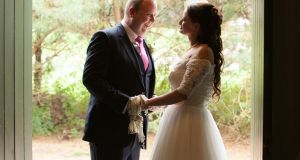 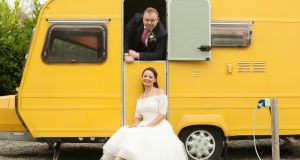 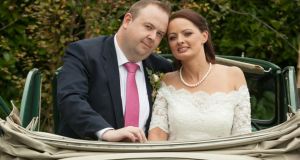 Music festivals like Burning Man, Bestival and particularly Electric Picnic played such a key role in Rachel and Gareth’s relationship that the ideal setting for their own “Wedfest” was Mount Druid, a whimsical, glamping haven set on 140 acres in Co Westmeath.

Both from the Dundrum/Ballinteer area of Dublin, Gareth and Rachel knew each other as teenagers and having both spent a few years in different parts of the world – Gareth working in Vancouver and Rachel backpacking with her sister – the two old friends became reacquainted in 2010.

“I went to buy a jeep with my dad in Kingstown Motors Stillorgan and guess who was there selling the jeep? Only Gareth! That’s when we really started talking again.”

Having known each other so long, it wasn’t long before they started dating and at Electric Picnic 2011, they officially came out to their friends.

“Everyone got the shock of their lives at first but when they saw us together and how good we were, they knew it was a match made in heaven.”

Two years later, Gareth proposed to Rachel during a sailing holiday in Majorca.

On September 17th, 2016, they were married in a civil ceremony, officiated by Rachel’s father’s cousin Philip Byers, in Mount Druid’s Tin Chapel.

Rachel’s uncle David and his wife Jill, who had flown from Canada, surprised the couple during the ceremony with a reading from A Lovely Love Story by Edward Monkton.

The bride’s parents are Donald and Sandra and her sister Nicola – “superorganiser” – was bridesmaid. Gareth is the son of Niamh and Eamonn and his best man was his brother Conor.

160 guests – including the couple’s Labrador, Mia, and Yorkshire terrier, Talulah – were entertained by the Manouche Swing band in the lakeside boat house before a “BBQ” style wedding reception in the barn where fire eaters, 1980s band Spring Break and the arrival of a 1950s chipper van at 11pm added to the festival vibes.

And their first festival as newlyweds? They’re currently considering Body and Soul in June.

In Irish orphanages, being ‘coloured’ was a defect. I wish Mam had lived to see Black Lives Matter
3

Hanging up my fork: My final three meals as Irish Times restaurant critic
4

A week of eased restrictions: ‘It’s reopening way too fast’
5