Our Wedding Story: A musical wedding with American guests 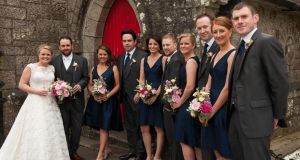 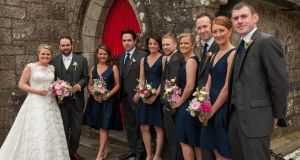 Claire (31) was born in the US after her father Bernard moved to New Jersey with the IDA in the 1970s and met Sheila Nolan, Claire’s mother.

In 2006, before her final year at Cornell University in Ithaca, New York, Claire spent a summer in Dublin and returned after graduation to study for a postgraduate degree in accounting before training with KPMG. John (33), from Castleknock, was playing a gig with his band, Eastern Harps, in 2009 on Dame Street when he was introduced to Claire through a mutual friend.

He proposed at the O’Rourke family home in Inniskeen, Co Monaghan, while Claire’s parents were visiting from the US. The first person Claire told was her grandmother, who has since passed away.

Claire and John were married on August 8th, 2015 by the bride’s great-uncle, Kevin Lyon – who married everyone in the O’Rourke family – in Cross Chapel church, Blessington, Co Wicklow. Claire’s mother played the flute and groomsman Niall Malone played guitar, while his girlfriend Rosie Murray sang.

The groom’s parents are Maeve and Michael O’Donoghue.

The reception was held in Killashee House, Naas, Co Kildare, where on the following day the groom took to the stage with his band to play traditional Irish music for all the guests, including some 70 Americans. The couple, who live in Rathmines, in Dublin, honeymooned in Italy.