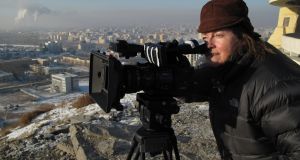 Ciarín Scott: A positive, energetic force within the documentary film industry, she worked long and hard on projects, determined to see them through to the end

The award-winning documentary filmmaker, Ciarín Scott has died suddenly in her home in Dun Laoghaire. A tenacious and much appreciated figure in the world of documentary filmmaking, Scott was best known for In a House That Ceased to Be (2014), a raw and honest biopic on the Irish-born international charity worker, Christina Noble and Waiting for the Light (2008), a funny, intimate and moving portrait of pioneering documentary filmmaker, George Morrison who made Mise Eire and Saoirse.

A positive, energetic force within the documentary film industry, she worked long and hard on projects, determined to see them through to the end, even if she sometimes had to fund them herself.

Michael Scott – a Changing Man, the 2006 documentary she made on her father, the modernist architect, actor and visionary artist, was screened at Irish and international festivals and won the best editing award at the Milano Documentary Festival in 2007.

Ciarín Scott grew up the youngest of five children -and only daughter - to Michael and Patricia (Patty) Scott in Geragh, their iconic Modernist home in Sandycove, Co Dublin.

In an interview at the launch of the documentary film on Michael Scott, she said that hers was an unconventional, bohemian sort of upbringing. A rebellious teenager, she attended Holy Child School for Girls in Killiney but was excluded from all classes except English and history, the only two subjects taught by nuns she liked. She spent the rest of her school days contently reading books in the school library.

Following school, Scott was given the opportunity to study at Trinity College Dublin but instead opted to go to the Sorbonne for a year. However instead of going to lectures, she spent most of her days at the cinema, which was when her love for filmmaking was truly ignited.

Upon her return to Dublin in the late 1960s, Scott was trained in all aspects of film making with the documentary film maker, George Morrison. A few years later, she moved to London, picking up jobs as an assistant film editor and later as an editor.

Her first film, John and the Magic Music Man (1976) won the silver medal at the New York Film and Television Festival and the Grand Prix at the Besancon Film Festival. It was chosen by film director, Alan Parker to be shown as the opening short before his musical gangster comedy, Bugsy Malone.

Scott married businessman/investor, Tim Proctor in 1976 and their daughter, Cara was born in 1979.

The family lived in Notting Hill Gate throughout the 1980s while Ciarín commuted to Dublin to make commercials for Irish television. The couple separated in 1991 and Ciarín and Cara moved to Brook Green in west London for a few years.

Scott later returned to live in Notting Hall, her favourite part of London and began making the documentary films that gained her greatest acclaim.

In 2013, she returned to live in Dublin and bought a house in Dún Laoghaire in 2014. By this time, her daughter Cara had moved with her husband, Rashid to live in Tanzania. Scott travelled every year to spend Christmas in Tanzania with them.

Her daughter, Cara said that her mother was humourous, open-minded, unjudgmental and warm. “She had a strong sense of social justice and hated bigotry and inequality.”

Always bristling with ideas for new projects, she was keen to do a biopic on Irish writer, Jennifer Johnson, a documentary on the Forty Foot bathing area in Sandycove and to share with the world the harmonious life of the Hadzabe hunter-gatherer tribe in Tanzania.

She had recently finished shooting a documentary on a ballet school in Notting Hill, London called The Only Boy in a Sea of Pink. Filmmakers, Paul Duane and Catherine Lyons are now planning to complete the editing of this film for screening. Ciarín Scott is survived by her daughter, Cara, her son-in-law, Rashid, her brothers, Michael, Brian and Niall, extended family and close friends. Her brother, Anthony predeceased her in 2000.

Perfect chicken schnitzel: it’s all in the breadcrumbs
10