Putting his money where his art is 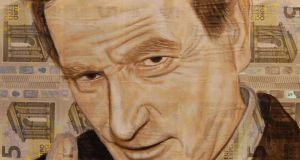 The moral fiver: Ger Kenny’s depiction of the Taoiseach on the five euro note

Some people put their money where their mouth is, one Limerick man has put his money where his art is. In protest over the property tax and household charge, artist Ger Kenny has refused to pay both and instead has vented his frustration by painting a portrait of Enda Kenny on 20 €5 notes.

The move was prompted after he received a letter from Revenue recently advising that they will contact his employer and take the money from source. Kenny, an IT worker based in Shannon has had a strong reaction to his artistic flight, with the local media picking up on the story and his Facebook page registering 360 “likes”, so far.

‘We’ve paid enough’
Kenny (34), a resident of Montpellier, Co Limerick, told “The Limerick Leader” that he and his wife built their house nine years ago, and now it is in “slight negative equity” and he does not believe they should be “re-taxed” in this way. He says they can afford to pay the charges, but he believes people have paid enough through VAT and stamp duty without adding to the burden.

Attacking the Taoiseach’s leadership and treatment of the electorate, Kenny said: “Now when people are at their most vulnerable the banks that we bailed out have been given permission to step up the repossession of homes from people with mortgages in arrears. I can only imagine what it feels like to have your home repossessed by the very bank that you bailed out for a debt that you weren’t responsible for, when will the people get their bailout Enda?”

He adds that he doesn’t intend selling the painting, but wants to draw people’s attention to the issue.

Chinese in Ireland: Raising children away from ‘tiger parenting’
8

Michael Harding: I decided to have another go at finding a camper van
9

‘I began tasting wine, rather than just drinking it,’ says an Irishwoman in Zurich
Real news has value SUBSCRIBE