What’s the cure for a jellyfish sting?

Some stings can be treated with just salt water, but others need something a little stronger 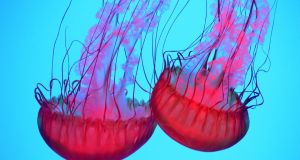 You can treat some stings yourself using first aid but if the symptoms are serious – such as severe pain, swelling or difficulty breathing, seek immediate medical attention or call an ambulance.

OK so technically a Man of War is not a jellyfish. But get stung by one and you’re going to be in too much pain to debate the finer points of binomial nomenclature. With an armada possibly on their way in the North West, here’s what you need to know...

Even a dead jellyfish or man of war can sting.

A man-of-war sting is excruciatingly painful but rarely deadly.

You can treat some stings yourself using first aid but if the symptoms are serious – such as severe pain, swelling or difficulty breathing, seek immediate medical attention or call an ambulance.

Ditto if a large or sensitive area of the body such as the face or genitals has been stung.

According to the Mayo Clinic, for minor stings most jellyfish stings can be treated by rinsing the area with salt water and taking a pain reliever.

In most cases it recommends removing any pieces of jellyfish tentacle in your sting by rinsing the wound with seawater and possibly gently scraping off the stingers with the edge of an ID card or credit card. You can also pick them out with a tweezers or a clean stick.

Do not rinse the sting with fresh water or rub it with a towel as this can activate the stingers.

After that, try applying a heat pack to the affected area, or immersing it in hot water, to help to reduce pain.

Pain and swelling can also be treated with painkillers such as paracetamol and ibuprofen.

Rashes or other skin reactions due to delayed hypersensitivity can be treated with oral antihistamines or topical corticosteroid creams.

If you’re heading to the beach keep vinegar or baking soda in the car – rinsing the affected area with vinegar for about 30 seconds can help, as can applying a paste of baking soda and seawater. However, this can deactivate the stingers of only some types of jellyfish – not all.

According to the UK’s NHS website, if you know it’s a Portuguese Man of War sting do not use vinegar to wash the affected area, as it can make the pain worse.

Do not use pressure bandages and, regardless of what has stung you, don’t take the Friends route and try to find someone to pee on you. Not only is there no medical evidence it works, there is some evidence it makes things worse, no doubt in more ways than one.