Is aspirin really a miracle drug?

Jim came to see me after some tingling in his hand. It was a TIA – a recognised stroke warning 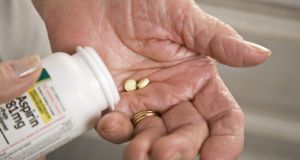 Starting a person on aspirin immediately after a TIA reduces the risk of a stroke within the coming weeks by up to 80 per cent. Photograph: iStockphoto

Jim came to see me with his wife. The night before, he noticed some tingling in his right hand and some weakness in his right arm. The symptoms settled after a couple of hours; he was inclined to forget about it but his wife was insistent that he be medically reviewed. I was glad that she did. Jim described a transient ischaemic attack (TIA). A recognised warning sign of a future stroke, the symptoms resolved because the blockage in the artery had cleared itself on this occasion. But next time, the blood might not return.

I immediately started Jim on daily aspirin. Known to reduce the long- term risk of stroke after a TIA by about 12 per cent, recent research published in the Lancet shows a more striking immediate effect. In a review of data from more than 40,000 people, researchers found that starting a person on aspirin immediately after a TIA reduces the risk of a stroke within the coming weeks by up to 80 per cent.

Writing in an accompanying editorial, Prof Graeme Hankey, of the University of Western Australia, says that when a person either appears to be having or has had a TIA, aspirin “should be administered immediately. The benefits in reducing the risk and severity of early recurrent stroke are greater than previously recognised.”

He suggests people consider self-administering aspirin while they wait for a medical assessment post TIA.

More support for the prophylactic role of aspirin has come from the US Preventive Services Task Force (USPSTF). It says that people aged 50-69 years who have a 10 per cent or greater 10-year risk for cardiovascular disease (CVD) and who do not have higher risk for bleeding should consider taking low-dose aspirin to help prevent CVD and colorectal cancer.

People considering starting regular aspirin should have a life expectancy of at least 10 years and be willing to take the low-dose aspirin (75 -100 mg/day) for at least a decade, according to a recent USPSTF report.

Aspirin has ancient origins.Two centuries after the bark of the willow tree was first brought to Europe in recognition of its fever-reducing ability, the active ingredient of the bark was isolated as quinine. Salicylic acid was a further refinement, but produced irritant side effects, especially of the stomach and gullet. This problem was solved by the work of Felix Hoffman, a young German chemist working for the pharmaceutical firm Bayer, with the production of a powder containing acetyl salicylic acid (aka aspirin).

Bowel cancer is associated with high levels of prostaglandin in the bowel wall. Aspirin inhibits an enzyme called cyclo-oxygenase (Cox) which is needed to produce prostaglandin. As a proven Cox inhibitor, aspirin helps to block the inflammatory chemicals which are associated with colon cancer. This anti-Cox action is key to aspirin’s protection against a broad range of cancers.

Although evidence of the benefits of a daily aspirin continues to strengthen, those considering long-term treatment should consult their physician. Aspirin’s principal side effect is bleeding in the gastrointestinal tract.

So it is best to discuss your individual risk of this happening versus the likely benefits of taking the drug with your doctor.