Girls and women in sport: ‘Forget the glass ceiling, take off the roof’ 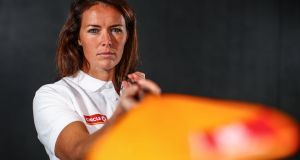 World champion canoeist Jenny Egan was one of the speakers at the Sport Ireland event. Photograph: ©INPHO/James Crombie

Recent Wimbledon finalist (and seven-time champion) Serena Williams’ frank comments about the perception of women in sports sum up what many female athletes face in training and competition. “If we show emotions, we’re called dramatic; if we want to play against men, we’re nuts; if we call for equal opportunity, we’re delusional; and if we get angry, we’re hysterical, irrational or just crazy.”

Earlier this month, the #WePlay – Inspiring Girls in Sport conference at the Sport Ireland National Sport Campus was a perfect introduction to the challenges of being a female in sport.

The event – with its striking strapline “Proud to Be Me” – was about empowering teenage girls to participate in sport, to get the most of their training and to do their best in competitions. And as a direct response to the #2020 social media campaign “If she can’t see it, she can’t be it,” the all-women panels (bar one token male) of sports professionals and elite athletes shared their passion and pragmatism about getting ahead in sport.

Nora Stapleton, the Women in Sports lead at Sport Ireland, said they “want to support girls to participate, to become coaches and referees, to take leadership roles and be role models for others coming after them”.

Former Cork City coach Lisa Fallon was recently appointed manager of the English FA Women’s Super League side Chelsea. “I loved football when I was 12 and now, at 42, I’m earning a living working in football. I say forget the glass ceiling, take off the roof. Don’t set yourself limits and keep going when your opportunity comes. And judge yourself on what you’re going to be, not on what you are today.”

“It’s all about controlling the controllables, not questioning your commitment to training and then performing to the best of your ability,” said Egan, who came fourth in the 2019 European games in Minsk, Belarus.

Drought also spoke about being a woman in the male-dominated sport. “I didn’t have any guidance when I was younger but I’m delighted to support other women now,” said Drought, who is part of the Formula Female campaign to encourage more women into motor sports.

Baker said it was important for young athletes not to be too hard on themselves with co-pressures of study and training. “If you’ve done two hours of study, go out and give your best at training. Team sports are a great distraction for 15-20 year olds and I find that players are great at backing each other up and giving great advice.”

Body image becomes a big focus for many teenage girls, and athletes are not immune to being influenced by the idealised body types on social media sites. Female athletes are also subject to a lot of negative online commentary which is hard to ignore.

World champion swimmer Mona McSharry spoke about how she lost 6kg last summer and thought she looked great yet she wasn’t swimming as well. “I’ve broad shoulders of a swimmer but I need this body to get through the water. It’s not all about having a six pack [abdominal muscles] and looking great.”

Eve McCrystal, pilot tandem cyclist with blind cyclist Katie-George Dunlevey in the Paralympics, said the key to choosing a sport was enjoyment. “Whatever sport you choose, you have to enjoy it. The passion needs to be there.”

As an older athlete, she also encouraged younger athletes to be careful who they follow on social media and make sure to eat proper food to keep healthy and well for training and competitions. Celebrity and self-styled experts on Instagram are not reliable sources for nutritional advice.

Danielle Logue, sports nutritionist, said there were a lot of myths around nutrition – particularly about cutting out dairy and carbohydrate foods – which are dangerous for teenage girls.

“You have to treat food as fuel because if you’re not healthy, you can’t perform. Dairy foods are fuel for recovery and repair and you need carbohydrates for energy. If you haven’t had three consecutive periods, there is an imbalance in your body,” she said.

All panellists agreed that teenage girls need to realise that if they train in the evenings, they need to eat high-quality protein and fruit and vegetables afterwards. “It’s about getting the basics right. The key is to eat a well-balanced meal one hour after training,” added Logue.

The speakers mentioned the importance of not spending time on mobile phones – before training sessions and before going to sleep.

“I worked in a swimming camp where the athletes couldn’t have their phones near them during mealtimes and they were more focused and sharper in their training sessions,” said Niamh Buffini, a strength and conditioning and Taekwondo coach.

The menstrual cycle: A barometer of health and wellbeing

Dublin senior camogie captain Róisín Baker – who is training to become a doctor – said it was important for young women to talk openly about their menstrual cycle and learn the best way of dealing with periods.

“Periods are a great way of monitoring athletes’ health and knowing if they aren’t eating properly, training too hard or under too much stress,” she said.

Sharon Madigan, from the Sport Ireland Institute, said young athletes were at a higher risk of injury, fatigue and illness if they don’t get the right balance between nutritional food, training and recovery.

“I’ve seen a lot of female athletes who haven’t had a period for a couple of years. Higher levels of training without the right foods can create imbalances in general health, bone health and immunity. Missing as little as three periods in a row can have serious impact on bone health,” Madigan said.

Fitrwoman is a free app which provides personalised training and nutritional suggestions tailored to each woman’s changing hormone levels throughout her menstrual cycle.

The app divides the menstrual cycle into four phases – menstruation, toward ovulation, ovulation and the days before menstruation – offering women suggestions as to how to best use each phase.

“Phase one is a good time for strength training,” said Niamh Mallon from Orreco, who developed the FitrWoman app. “You are more susceptible to injury during phase two. You have improved mood and energy during phase three and it’s good to exercise during phase four to help manage pre-menstrual symptoms including inflammation.”

Madigan said young athletes should monitor their periods and change their training and diet to manage their symptoms best. “For example, more fruit and vegetables can reduce inflammation in the pre-menstrual phase.”

Madigan said female athletes could use their menstrual cycle as an overall barometer of their health. “It’s also important to engage with your coaches about pre-menstrual symptoms and see what adaptations can be made.”