‘It keeps you fit, healthy and flexible ... for self defence its great’ 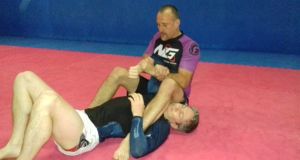 Owen Dempsey teaches Brazilian Jiu-Jitsu at the Next Generation MMA club in Deansgrange, Dublin, as well as other martial arts. He brings to it years of experience from his time competing as a MMA fighter.

Where does the art originate?

During the 1920s Mitsuyo Maeda, a Japanese Master, taught Japanese Judu and Jiu-Jitsu to the sons of a Brazilian business man Gastao Gracie. Two of the sons, Carols and Helio Gracie, were probably the more famous out of them, they started teaching his art and they started modifying their own techniques. To test their own form they opened a challenge to other different styles of martial arts, called the Gracie challenge, so you could come to their club and compete against each other to test their style. It was then known as Gracie Jiu-Jitsu and as it spread though Brazil it became known then as Brazilian Jiu-Jitsu.

This is the Jiu-Jitsu style you will see in MMA.

How popular an art is it?

It spread down through the kids of the Gracie brothers families. They came to America in the 1980s and spread the art to the rest of the world. In 1990s they put on the first Ultimate Fighting Championship (UFC) show. One of the brothers Royce Gracie competed in the first UFC’s very limited rules in it back then, no time limit and he basically beat everyone and showed the world the effectiveness of Brazilian Jujitsu. Anyone that would have trained in Martial Arts at the time would have started seeking out clubs that trained it or fly to Brazil to learn it.

What is the main focus of the Brazilian Jiu-Jitsu?

The Japanese version would have been for the battlefields, you couldn’t punch and kick someone wearing armour so you’d try to take him down and immobilise his joints. With the Gracie’s, they modified it for self defence, basically when a physically smaller or weaker person can’t defend themselves against a stronger opponent.

There’s not really a trade mark move, there is so much to it and it keeps evolving, You get a bigger, stronger opponent and you go to the ground with him you are really kind of eliminating their strength - you are like a snake, as they are kind of panicking, you are tightening up things and catching them in a lock or a choke hold.

For the majority it’s a blue belt, purple belt, brown belt then you get your black belt and from then on it’s your dans up to being a Master. In Jiu-Jitsu it can take a long time from one belt to another. Some clubs do it on time, where after a certain amount of time of training you might get a stripe on your belt but other clubs, particularly in the club I’m in, its your skill level and you could be on the same belt for years before moving up.

Competition is in the last ten years it has exploded all over the world, it’s really big now and what you have is Gi Jiu-Jitsu, with the kimonos and you have no Gi where it is just a pair of shorts and a top. With Gi the clothing can be used for grabs and holds.

I wouldn’t be surprised if we see it in the Olympics in a few years.

There are clubs all over Ireland and the people are very friendly and welcoming. Our club in Dublin is affiliated to Next Generation MMA in Texas, which was founded by UFC veteran Chris Brennan. They have affiliates in Northern Ireland, Europe, USA and Australia. There is the IDJJF, that’s one federation worldwide but there are lots of federations throughout the world.

It has huge health benefits, the amount of calories you burn, when you are rolling when you are starting is phenomenal. It keeps you fit, healthy and flexible because you’ve got to be flexible to do it and kids love it. You have guys that are in their 50s and 60 s and still competing in it and still practicing it.

For self defence its great. Usually an attacker tries to get you to the ground, that’s were you could put choke hold on and it doesn’t matter how big or strong he is you’ll be the one beating him up! I think it’s essential, it’s technique and leverage that comes into play.

Extremely safe once people know what they are doing and have good teachers. When you are rolling and someone catches you in the technique you tap them, it’s called tapping out, so you tap the mat or verbally tap. It’s the same in competitions. You are not taking blows, there are no shots to the head, you are not allowed to punch or kick.