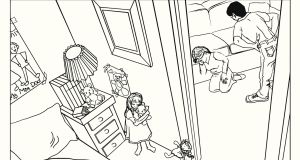 Thousands of people are still tormented in their own homes by the very people who should cherish them.

It has been 44 years since Nuala Fennell, a leader of the women’s movement, wrote a letter to The Irish Times, drawing attention to the problem of domestic violence and seeking support to do something about it. Women’s Aid, the organisation which grew out of that letter, notes on its website that the initiative got a huge response.

I was sorry, but not surprised, to see a recent headline in The Irish Times making it clear that domestic violence remains a reality in too many homes almost half a century later.

It is not that nothing has happened since 1974. The number of services for women and for men who are victims of domestic violence has increased since then. Awareness of the problem has grown, and the legal recourse of people who are abused physically and emotionally in their own home has greatly improved.

And yet in the 1970s, the men and women who were appalled by the stories they heard of “battered wives”, may very well have thought that it would be possible to bring an end to this disgraceful problem long before now.

I visited the Women’s Aid in Dublin in the late 1970s or early 1980s. One of the doors was covered in corrugated sheeting following an attempt by a husband to gain entry knowing his wife was inside. Almost 50 years later, the exact location of women’s refuges is often not publicised for fear of drawing hostile attacks.

Back in the 1970s for a woman to leave her abusive husband was extremely difficult, as it is today. Where would she live and what could she afford? At least barring orders, introduced in 1976, offered the possibility that the woman who was abused could remain in the family home with her children.

Last year 2,300 safety orders, 5,000 protection orders and 822 barring orders were issued by the district courts. A safety order prohibits the person against whom it is issued from engaging in a threatening violence but they are not obliged to leave the family home.

What of inflicting emotional abuse and terror on the other partner? Does this arise from an extreme fear of abandonment as I sometimes suspect? Is there a sadistic element in which instilling fear in the other person gives pleasure to the abuser? We don’t really know.

Why does it happen that teenage sons or even daughters will join in the physical abuse of one parent by another?

This is less common than abuse by a partner and abuse by a daughter is less common still but it does happen. About 500 applications a year are made to the courts by parents seeking barring orders against their children. Are these children engaging in a learned behaviour or do they have a genetic predisposition to violence? We don’t know.

Domestic violence shames the men and women who engage in it, mostly men I’m afraid.

I would like to think that the focus on the abuse of women (mainly) as highlighted by the #metoo movement might bring about a major reduction in domestic violence. But that is similar what I thought back in the 1970s. Attitudes have changed, services have got better and legislation has improved but thousands of people are still tormented in their own homes by the very people who should cherish them.

That’s why, 44 years after Nuala Fennell wrote that letter, bodies such as Women’s Aid continue to need our support.

Can anyone who watched the HTV documentary, Scream quietly, or the neighbours will hear, about wife brutality in England, fail to have been chilled by the spectacle it exposed.

The film was made at the Chiswick Women’s Aid Centre. In England, society now acknowledges the social evil of family brutality, husbands who with almost animal aggression will beat, kick and violently abuse their wives. Mrs Pitchie, founder of Chiswick Women’s Aid, at any one time can have 60 wives and over 150 children taking refuge in her very overcrowded home. She is at least offering to women what it has never been officially acknowledged that they need: security, peace and an understanding of what it is like to live with a brutal husband.

The sentiments of some of the women speaking on the film could have come from the many letters 1 receive from Irish wives, suffering in exactly the same way. In the past month over 10 cases in the Dublin area have been heard in court. A quote from one such case: ‘The wife had to leave the house with two of her children. She collected the other three children from school. The children were terrified to go home, so she walked them around until evening. The husband arrived home and came into the room and struck her with his fist in the ribs. She collapsed on the floor, but recovered and told her girl, aged 5, to go and telephone for the gardaí. The wife then went to a neighbour’s house where she again collapsed and was taken to hospital.’

Women with this problem living in the country have a solitary misery; they cannot talk about it, so they write and describe the injuries they receive and their efforts to hide them from neighbours. One woman who sent me a colour picture of her battered face, had to pretend that she walked into a post in the dark. In another case I know, where the local police had 25 complaints of brutality made by the wife, but because the husband is an important person in the area, they refuse to press charges. I have seen women who have had their faces cut with a carving knife, their hair pulled out in lumps from the roots, arms broken, chest and stomach kicked, in many cases, incredibly, when the woman is pregnant with the husband’s child.

Why do women endure this situation? Apart from the obvious fact of her financial dependence on her husband , she is tied to the home by her role as mother and wife as well as her bond of devotion to her children . She has no money, no job and seldom the kind of contacts that will help. Women fear for their own physical survival but have even a greater concern for the emotional welfare of their children who cannot but be witnesses to the beatings, and carry the resultant mental scars for life. Of course there is the overall need for law reform in this area as in so many others, to give greater protection for such wives, there is the need for psychiatric counselling and treatment of the husbands, the need to recognise that herself and her children should have first rights to the family home when such a crisis occurs.

But the immediate need is for shelter and a refuge for such women and children. None exists as of now. Wives have told me that they walked the night streets with their small children until daylight, with nowhere to rest and afraid to go home. Most cases of this kind occur on Friday and Saturday nights, but welfare agencies dealing with family problems work on a nine to five basis, with no emergency provisions for weekend needs. Knowing the way the State will abdicate responsibility for any problem area in which a voluntary group is operating, I am reluctant to suggest that a home should be set up by voluntary effort, on the lines similar to the British one, but unless the initiative is taken by ordinary people , nothing will be done.

Anyone who saw the programme, who would like information on the situation that exists here, or who would be interested in organising a project such as the Women’s Aid in England, can get in touch with the undersigned.

Many Irish women and children depend on others to take the initiative to help them.

– Padraig O’Morain (pomorain@yahoo.com @PadraigOMorain) is accredited by the Irish Association for Counselling and Psychotherapy. His latest book is ‘Kindfulness’. His daily mindfulness reminder is free by email.