Music proves to be food of love for the generations 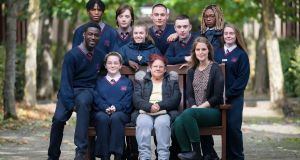 Pupils from Mount Seskin Community College, who were involved in a musical project with their grandparents. Photograph: Dave Meehan/The Irish Times

It was the look of wonder on the face of his children’s great-grandmother that first gave hospital consultant Rónán Collins the idea to use music and technology to bring the generations together.

She had just been played a video clip of legendary tenor Mario Lanza singing – a voice she had grown to know and love through listening to her father’s phonograph. But to see him, in person so to speak, on the screen of an iPad and be transported back all those years was astonishing to her.

Too often technology is driving the generations apart, says Collins, a consultant in geriatric and stroke medicine at Tallaght hospital in Dublin. He devised a musical reminiscence project to use it to bring them together instead.

Parents and grandparents used to hear the upcoming generation’s beat through communal stereo systems and “turn it down” was a staple of family life. Now it’s all headphones and silent nodding to a personal playlist, so it takes an effort to share,

Composer Ian Wilson came on board with Collins to sit down with students from Mount Seskin Community College in Tallaght and from Cashel Community College in Co Tipperary, to ask what pieces of music they felt the strongest emotional connection to and why – an exercise that was then repeated with the teenagers’ grandparents. It was soon apparent that, of course, they liked different music, but often for the same reasons.

Loss, nostalgia and feeling different were recurring themes, says Wilson, who, titled the project “Same As It Ever Was”, after a Talking Heads song that is part of his own life’s soundtrack. With the help of UK poet Helen Pizzey, he turned fragments of these conversations about meaningful music into new songs. Then he set those songs to music.

On a recent Wednesday morning in the library of Mount Seskin in Jobstown, some of the project participants and other music students are the first to hear these songs performed by Dublin-born, London-based singer Lauren Kinsella, voted Jazz FM Vocalist of the Year in 2016. Her voice, backed by a couple of instrumentalists, is captivating as lyrics about memory, sharing and loss lap around the room.

Some of the students would never have heard music performed live professionally before, says music teacher Aoibheann Doyle afterwards.  The performance was repeated in the Cashel school the next day.

Aoife Ryan (16) from New Inn, Co Tipperary,and her grandmother Noreen Heaney (76), who lives nearby, both like musicals but diverge on the older woman’s fondness for country and western. They know that now, thanks to the project.

“It has definitely brought us closer together through listening and comparing music,” says Aoife. She showed her nanny music videos, such as those of Ed Sheeran. Noreen, who secretly started computer classes without telling anyone in the family, is able to return the compliment by sharing classical composers, such as Strauss, on her own laptop.

Back in Jobstown, Megan Fay (16), who is doing music for her Leaving Certificate, collaborated with her grandmother, Diane Fay (68), for whom Neil Diamond songs strike a particular chord. The teenager downloaded them on to a CD for her, which she could play on a Walkman. What did Megan herself think of the likes of Sweet Caroline, Coming to America and I Am I Said?

“I could appreciate them,” she says. For her part, she introduced Diane to music from the Icelandic band Of Monsters and Men. Listening to it just once was enough for her.

“Everybody has their own taste in music; to be honest with you, the songs in our day, I thought they were very good,” says Diane. “What they have now is very different – I couldn’t just sit down and listen to it.”

She thinks a lot of today’s music is rubbish – and actually Megan, who has a wide taste in music, doesn’t disagree. Going back another generation, the one song Diana recalls from her parents’ time is Oh! My Papa by the Everly Brothers.

Calum Gorman (16) chose a cover version of the Simon & Garfunkel classic Sound of Silence to play to his nanny, Rose Nagle, while she shared Piano Man by Billy Joel.

“She talks about old songs all the time – she listens to lots of 1950s stuff,” says Calum. He has recently discovered Johnny Cash, whose career took off in the 1950s; it was a cover of the song Hurt, which Cash released a year before his death in 2003, that first attracted Calum.

For Dami Hughes (16) and Mercy Musa (16), it’s the music of the late XXXTentacion that resonates.

“It’s hard to listen to his music but I still have to,” says Mercy of the rapper who was shot dead at the age of 20 last June, pledging that she will stick with him “forever”.

“It is the tone of what he is trying to get across,” says Dami to explain what appeals. Both he and Mercy brought their mothers in on this project.

“She was surprised at the song that I chose, Mambo Number 5, says Dami, while Mercy traded a song by Mena Martinez with her mother, who likes Beyonce – not  a taste her daughter shares.

Take one youngster, one elderly relative, add a tablet or laptop and start the conversation . . . that’s Prof Ronan Collins’s recipe for some inter-generational bonding. Children and teenagers can ask their relative to recall a favourite singer or actor and then look up a video clip “to see if they are any good” – and tap some memories from a vintage brain in the process.  The benefits are mutual. “Otherwise you miss out on all this stuff,” says Collins. “I found my grandparents to be a great source for learning about music, artists and famous films, that I would have missed.”