‘I am going to really struggle to come back if it’s a No vote,’ says returned emigrant

Yes supporters were more visible at Dublin Airport as thousands returned to Ireland to cast their vote in the referendum on the Eighth Amendment. 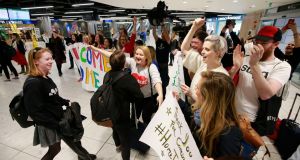 One of the many women walking through the arrivals hall at Dublin Airport wearing the now familiar black-and-white Repeal sweater, 19-year-old Eimear Shine, is tearful thinking about her friend who recently travelled to Liverpool for an abortion.

“I just can’t imagine the strength it must have taken to do that on her own - to go to Liverpool,” she says, visibly emotional. “I just wish I could have been there to support her but I guess I can do that now by being here.”

Ms Shine is studying in Holland and, like many others streaming into the airport on Thursday evening, has made the trip home to cast her vote in a referendum many of her age group believes belongs to them.

“I am going to really struggle to come back [TO IRELAND]if it’s a No vote,” she says.

Voters on both sides of the referendum debate have been coming home, although those seeking retention of the Eighth Amendment are less visible. In the arrivals lounge, a large “Welcome Home” banner is held up by cheering Yes supporters. Security guards earlier ordered the removal of any campaign posters.

Aisling White (30), who works for a housing organisation in Liverpool, is welcomed by her family.

Of her decision to come home to vote, she says: “It gives the women who have had to do the journey in the opposite direction [FOR ABORTIONS]a sense of unity, that people are standing with them.

“Even today I was in Liverpool airport and I know statistically there is a woman in that airport that has been there today that’s had to fly over and have treatment in Liverpool Women’s Hospital that she should have been able to have at home.” 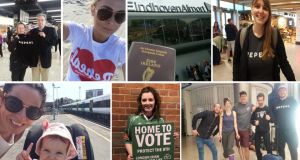 Claire McGowran of the London-Irish Abortion Rights Campaign, which organised the informal airport reception, said Yes supporters had come from as far afield as the US, Europe, Argentina, Iraq, Australia and Vietnam. A couple cut their honeymoon short in Japan, she added.

Mark McCormack (31), who works in genetic research in Utrecht in the Netherlands and is a member of the Scientists for Yes organisation, said he helped to organise crowd funding for a number of people who had wished to come home to vote but who couldn’t afford the airfare.

“In the last week it’s absolutely blown up,” he says of the initiative. “I would say there are easily a thousand people offering to fund people and a couple of hundred being funded. That’s only a rough number.”

Roger O’Keeffe (69) was standing at the railings with a Repeal sweater draped over his shoulders, waiting for his daughter Stéphanie who is five months pregnant and who has been raising awareness on the referendum in Brussels.

Mr O’Keeffe, who worked for the European Commission in the city for 20 years, said he was surprised how quickly the Yes campaign had built up support. The public mood was very different to that in 1983, he said.

“I think things like the Savita Halappanavar [CASE]might have changed a lot of opinions,” he said.

On the last day of campaigning, a group of doctors advocating a No vote said they had “serious concerns” with the Government’s proposals to legislate to allow access to abortion on request up to 12 weeks, if the Eighth Amendment was repealed.

Over 120 General Practitioners signed statement saying the proposed GP-led service to provide access to a pregnancy termination up to 12 weeks “without the need for any reason to be given by the patient” should not be described as “healthcare”.

The statement, released by the anti-abortion group Medical Alliance for the Eighth, said the plan to provide access to abortion up to 24 weeks where there was a risk to the mental or physical health of the woman was based on “vague and ill-defined grounds”.

Separately, 1,400 doctors have signed a petition calling for a Yes vote in the referendum on the TogetherForYes campaign group website. Signatories include GPs and medical practitioners working in hospitals.

Voting in the referendum on whether to repeal the Eighth Amendment, which establishes the equal constitutional right to life of the unborn child and the mother, opens from 7am on Friday, and closes at 10pm.

The ballot paper will ask people if they wish to approve of the Thirty-sixth Amendment to the Constitution Bill, which will repeal article 40.3.3, which came into effect in 1983 as the Eighth Amendment.

Counting of the votes will begin on Saturday morning, at centres across the country.

‘A new lockdown in Melbourne has shattered our spirits’
3