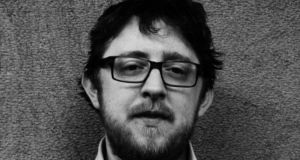 Nick Carswell: 'I am not the stereotypical immigrant in the US. As a white person, I enjoy a very real privilege in America... I might almost pass for a US citizen. But I am not.' 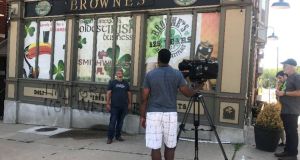 In January 2017, a week into Donald Trump’s term as president, I was waiting to board a flight at Kansas City International airport when I received an email from the office of international programmes at the University of Kansas.

As I was a KU employee and a non-US citizen, the email was advising me on the possible repercussions of a draft executive order the president was expected to sign.

One line in particular stood out, with the preemptive advice for persons “who might be affected” by the executive order to avoid international travel or to “return to the United States as soon as possible (tonight or early tomorrow) if currently outside of the country”.

Sitting in an airport departure lounge, surrounded by people of all colours, races and nationalities, it began to dawn on me, the reality of this president’s agenda to turn the US against another perceived enemy: immigrants.

The reality of this president’s agenda is to turn the US against another perceived enemy: immigrants

The January 27th, 2017, executive order, known simply as the “travel ban”, would become one of the Trump administration’s first efforts to act upon the anti-immigrant rhetoric he so flagrantly employed in his presidential campaign.

But for me, an Irish immigrant, it was also the first hint at what was to come: anti-immigration rhetoric and policy that would blur lines and tar all immigrants with the same brush, regardless of race, country of origin, immigration status or contribution to American society.

I am not the stereotypical immigrant in the United States. As a white person, I enjoy a very real privilege in America, and as a native English speaker, my accent is only barely noticeable in the first few sentences. I might almost pass for a US citizen. But I am not. Since Donald Trump took office, I am reminded of that fact every day.

With this president’s penchant for ruling by tweet, I’ve found myself at various times wondering when his latest vitriolic outburst is going to be aimed at me, or someone just like me.

Sometimes proposed policy changes affect me directly. One example is the “Buy American, Hire American” executive order, which specifically mentioned the H-1B programme in a broad call for greater scrutiny on immigration-approval processes and quotas.

Other times, the effect on me personally can be more of a stretch, like when the travel ban is described as designed only to apply to countries with “a history of terrorism”.

I know they aren’t thinking of Ireland, but it’s hard not to concede that we fit that description.

At other times, Trump’s irrational decrees may not affect me directly, aside from fuelling the lie that immigration is bad for America. For example, when an immigrant lawfully present in the US through the “diversity lottery” visa programme committed a terrorist attack in New York in November, Trump characteristically claimed the entire programme a “disaster” and made efforts to terminate it, fuelled by the lie that foreign countries “put their worst people into the lottery”.

Of course, I know Irish immigrants who eventually became US citizens through the diversity lottery, and are in fact some of the best people in this country, choosing to make America better by their very presence.

Still other times, my reaction is based entirely on an objective decision to resist anti-immigrant rhetoric. For example, when Trump characterises immigrants from Haiti and African nations as coming from “shithole countries”, something inside screams for me to take all my white, educated, highly skilled, merit-based eligibility and claim citizenship of one of those “shithole countries” – if only to resist the hate, racism and bigotry that comes from the White House.

How did this happen?

The shock of Trump’s presidential win can often be put down to a simple idea: Trump voters took him seriously but not literally, while his critics and detractors took him literally but not seriously. Where immigration is concerned, Trump supporters took him very seriously.

When Trump characterises immigrants from Haiti and African nations as coming from 'shithole countries', something inside screams for me to take all my white, educated, highly skilled, merit-based eligibility and claim citizenship of one of those 'shithole countries'

The problem arises when you realise that immigration is a highly complex issue. While Trump supporters took him very seriously on this issue, neither the president nor his supporters are inclined to address the subtleties of a topic that concerns the lives and free movement of millions of people.

Now, approaching 18 months into Trump’s America, there is little distinction made between legal and illegal immigration. In rhetoric they are the same, and in policy, Trump has stated clearly that he wants to drastically reduce both.

It is now painfully obvious that “America First” means everybody else last, including some of the US’s longest-standing allies in the G7.

Bar-room disputes and racist attacks escalate into outright murder, and racists are empowered to conduct public displays of bigotry and hate, such as vandalising ethnic storefronts with “Immigrants not welcome”, the message spray-painted on Browne’s Irish Market in Kansas City this week.

Last February, in our liberal midwest college town of Lawrence, Kansas, Americans in pick-up trucks drove through the downtown waving stars and stripes, as part of a “Defend the Flag” event. Video from the day showed mostly white men in baseball caps and tank-tops carrying confederate flags shouting things like “If you don’t like it, then get the f**k out”.

My wife, my US-born daughter and I were at home that day, just a few blocks away. Through social media, I caught wind of something going on, but we didn’t go downtown, because we really didn’t want to be involved. But maybe we were also scared that if they heard “an accent” they might have focused their attention on us.

It is important to note that these people are a very vocal minority of Americans. In the case above, the positive outcome was that our town mobilised heavily in response to this unabashed display of xenophobia. The community responded publicly to condemn those actions as a perversion of what Lawrence, KS stands for, and we banded together in resistance.

But in Trump’s America, as an immigrant, you have to assume those people are never far away.

Nick Carswell moved to Lawrence, Kansas with his wife Hannah in 2011. He is a musician, and currently works for the University of Kansas managing a radio information service for the blind and print-disabled.

Racism in Ireland: ‘‘You dirty black *****’ – I don’t want to say the word out loud’
Real news has value SUBSCRIBE