Our house escaped the bushfires in Tasmania, this time

Fire consumed 630sqkm of wilderness. The environmental impact is catastrophic 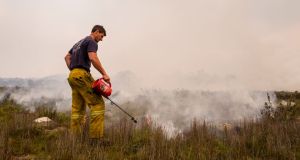 The water-bombing helicopters tackling the nearest bushfire to us here in southwest Tasmania have called it quits. After two weeks, the last of the evacuees have loaded up their tents, mattresses and belongings and left the local evacuation centre.

In the end, to everyone’s relief, Tasmania’s summer chose to reveal its benevolent side. This bushfire, after consuming 63,000 hectares (630sqkm) of wilderness, has been partially contained, and the smoke it generated has dispersed. Clearer skies and normal-looking clouds are once again a familiar sight in our valley.

It’s time to exhale, unpack the Ute, and to rehang the family photographs; to get out the ladder, unblock the gutters, to roll up the fire hoses, and to take stock.

No need now to scan the sky to establish the proximity of billowing black smoke, or watch out for drifting ash or burning embers. No call now to be unnerved by bright red flames lighting up the night sky on the hills over at Castle Forbes Bay, or to obsessively study the Tasmanian Fire Service website’s Alerts List.

Already, the corridor conversations and impromptu debriefings at work, and in the village about who lost what, or who saw what, and who stayed to defend, or who left, are starting to be surprisingly repetitious. Life goes on. It’s time now for the school kids to head off to their bus stops for the start of the new school year, and for us all to resume our daily routines.

It’s still too early for any blame games or recriminations, or even the limited wisdom of armchair experts or keyboard warriors. In several more remote parts of the island, the fires are still going. But of course, it’s a conversation I hope will happen. The sheer scale of these recent fires has upped the ante, and a comprehensive measured response is required. One fact is certain, there can be no quick fixes. Like mainland Australia, climate change is part of Tasmania’s new reality.

It’s difficult to comprehend that just over the river from us, several homes were obliterated, and harder still to believe that, across this island, almost 200,000 hectares of unique wilderness has now perished. The devastating impact on the wildlife, predominantly marsupials, is almost unimaginable.

And, it’s still only early February. Who knows what further environmental destruction the remainder of summer and possibly even autumn may yet unleash?

Let’s spare a thought for all those incredible firefighters. In difficult and inaccessible terrain, how these men and women do this dirty dangerous work with only basic equipment at their disposal, almost defies belief. Mostly volunteers, they are surely Australia’s modern-day unsung heroes.

Our valley is regaining its hues, its natural beauty and its sense of tranquillity. It’s almost as if it’s attempting to reclaim its natural dignity. The welcome sight of the mist, hanging low all along the Huon River, was back this morning, as if it had never really gone away. Even the birds are sounding exuberant, as if they too know they’ve had some kind of reprieve. All those eucalyptus trees that swayed with menace just a few days ago are now dampened by the recent rain. In the bush, a sense of normality has been restored.

Unprecedented and catastrophic are just some of the adjectives that have permanently installed themselves into our everyday vocabulary to describe Australia’s weather. We know now we can’t take anything for granted. But for now at least, we’re simply relieved and grateful; mindful too that there are likely more extreme weather events in store.

It’s soul-destroying to witness the paralysis of our bitterly divided conservative federal government, and its inability to formulate a coherent policy on climate change. It seems to be wanton cognitive dissonance on a massive scale. What kind of awful legacy are we bequeathing to our children, and the generations to come?

Individually, we do what we can to lessen our impact on the environment. We’ll settle for small signs that all is as well as it can be in our neck of the woods. Like the healthy-looking adult echidna that emerged yesterday evening to slake its thirst from our depleted dam. Or the spectacle of peep-wrens and fairy-wrens jostling as they take turns to immerse themselves in our still lukewarm bird-bath. At the risk of incurring the wrath of my wife, even the appearance of a tiger snake or two would be almost a welcome sight.

Time now to deal with the tangibles; those gutters, and the family photographs. With luck, more rain will come our way soon.