Mary Lee, the Irishwoman who campaigned for women’s rights in Australia 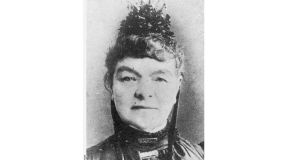 “My cause is the cause of womanhood, and no bluster or denunciation will silence me while one wrong to womanhood exists of which I have knowledge or against which I have the power to protest.”

So wrote Monaghan-born Mary Lee in the Adelaide Observer on August 22nd, 1891. She emerged from an obscure background to become one of the most prominent Australian suffragists, and campaigner for the rights of working women and asylum residents. She paired an uncompromising rhetoric with a social outlook informed by Methodism.

Following the death of her church-organist husband, Lee moved to Australia in 1879 to care for her terminally-ill son, Benjamin. She remained there after his death, partly because she could not afford to return to Ireland, and partly because - as Helen Jones states in the Australian Dictionary of Biography - she had grown fond of “dear Adelaide”.

Freshly liberated from domestic duties at almost 60 years of age, Lee threw herself into Australian politics. Establishing a reputation as a campaigner, she became secretary of the Social Purity Society, lobbying for legislation that ostensibly sought to protect women and girls, but had the effect of criminalising sexual expression that strayed outside heterosexual marriage.

On July 21st,1888, the South Australian Women’s Suffrage League was established at a large public meeting. Lee was elected co-secretary to the committee of 13 women and 15 men, and quickly became, in Australian historian Audrey Oldfield’s words, “a fiery and devastatingly logical orator and letter writer”. Lee was utterly dedicated to the cause, stating, “If I die before it is achieved, ‘Women’s enfranchisement’ shall be found engraved upon my heart.”

In April to August 1894, Lee organised a suffrage petition, collecting 11,600 signatures from across the colony of South Australia (a population of just under 326,000 was recorded in the 1891 Census). Four months after the 122-metre-long document was presented to the House of Assembly, South Australian women became the first in Australia to achieve a parliamentary vote on the same terms as men. This was a landmark moment, but one that excluded Indigenous Australians, who would not gain full equality of franchise until the 1960s.

Lee was a suffragist rather than a suffragette, pursuing constitutional means to secure equality of franchise. As Patrick Geoghegan points out in the Dictionary of Irish Biography, her apparent lack of concern for enabling women to run for elected office may appear conservative today, but her emphasis on social justice and labour rights was too radical for some.

A letter to The Advertiser in 1893 stated that Lee was “a turbulent anarchist”, “permitted unrestrained to stir the seething cauldron of class discord”. Indeed, as secretary of the Working Women’s Trades Union in 1891-3, Lee agitated for improved wages for women “sweating” in clothing factories, and distributed food to women suffering the effects of economic depression. In 1896, she became the first woman appointed as an official visitor to asylums - a role her obituary stated that she conducted “faithfully and lovingly”.

Despite a gift of 50 sovereigns raised by public donations to mark her 75th birthday, Lee’s later years were marred by financial problems. Her pleas for aid fell on deaf ears, despite the great personal sacrifices she had made as an activist. Patrick Geoghegan suggests that her “sharp tongue and uncompromising attitude” had left her with few friends - while women had secured the vote, they were still bound by Victorian behavioural norms.

She died at her Adelaide home on September 18th, 1909, aged 88. Her understated tombstone in the Wesleyan cemetery, bearing the words “Secretary of the Women’s Suffrage League”, hardly reflects the activism to which she passionately dedicated the last decades of her life. Having lain silent and almost completely forgotten for decades, her memory was resurrected during the centenary celebrations of South Australian women’s suffrage in 1994, with a bust erected near Government House, Adelaide.

This Extraordinary Emigrants article was written by Dr Angela Byrne, DFAT Historian-in-Residence at EPIC The Irish Emigration Museum (epicchq.com) in Dublin’s Docklands, an interactive museum that tells the story of how the Irish shaped and influenced the world. Learn about more pioneering Irishwomen at the free exhibition, ‘Blazing a Trail: Lives and Legacies of Irish Diaspora Women’ at EPIC, January 4th-18th.