Review: Airing of explicit detail in this documentary risks voyeurism, but is justified 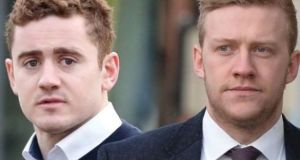 Paddy Jackson and Stuart Olding were acquitted of the charges

Eight months after Irish international rugby players Paddy Jackson and Stuart Olding were acquitted of rape in a Belfast court, their trial evidence has been revisited in search of fresh answers. Not in a new legal process, of course – the men cannot be retried for a crime which they were found not guilty of – but instead in a grimly absorbing new radio programme.

Broadcast on RTÉ Radio 1 this Saturday, Documentary On One: Notes from a Belfast Rape Trial methodically sifts through the courtroom proceedings that unfolded over nine weeks earlier this year, though not with the intention of questioning the verdict. Rather it is the trial process itself that is in the dock, specifically the adversarial system that put the young woman who made the rape complaint through a harrowing and humiliating ordeal in court.

The documentary arrives at an opportune moment, coming in the week when retired Judge John Gillen published his preliminary report into the handling of sexual assault cases in Northern Ireland. Different rules apply for rape cases in the Republic – defendants are not named, for example – but the documentary also raises uncomfortable questions about how sexual assault allegations are approached south of the border too.

Produced by Liam O’Brien and Ronan Kelly – who also co-narrates with Emer Horgan – the programme is part current affairs investigation, part on-the-spot reportage, part reconstruction. Unsurprisingly, the account of how Jackson, Olding and two other men were tried for sexual assault against the then 19-year-old woman in Jackson’s house in 2016 makes for disquieting radio. The listener isn’t spared the intimate details that were given in evidence. “It’s not what you’d normally hear on radio,” Kelly says early on, giving the first of several warnings about often distressing material. Relaying such explicit detail on-air carries the risk of voyeurism, but the approach seems justified. The documentary clearly lays out the tactics used by both prosecution and defence lawyers in rape cases and the impact these can have on juries.

I have no doubt whatsoever that it was very difficult, but I was bound to put those issues to the complainant.

Some familiar methods are used to recreate the trial: actors read out witness testimony, news clips are played. But there are also new perspectives to the story. Most striking are the interviews with lawyers from both sides: Toby Hedworth QC, the slightly showy barrister for the prosecution (but not, crucially, for the young woman) and the unsentimentally rigorous Brendan Kelly QC, who represented Jackson. The latter lawyer, a cousin of narrator Ronan Kelly, explains the rationale behind the courtroom tactics that earned him much opprobrium on social media, such as brandishing the blood-stained thong of the young woman, referred to throughout as “the complainant”.

“It’s too easy to stand outside a courtroom and say that was humiliation,” the barrister says of his methods. “I have no doubt whatsoever that it was very difficult, but I was bound to put those issues to the complainant.”

In a documentary full of upsetting vignettes, this may be the most jolting moment. But it also captures a key theme: the disconnect between the coldly technical but also ruthless demands of legal procedure and how this is viewed differently by the world outside. While Kelly doesn’t sound triumphant about Jackson’s acquittal, it’s equally notable that his opposite number Hedworth doesn’t seem unduly distressed by the verdict.

The documentary also looks at the strain such trials put on the jurors who ultimately decide its outcome. Ronan Kelly talks about the wearying effect of hearing so much graphic sexual detail, but observes that unlike listeners, the jury can’t turn it off.

The documentary paints a depressing picture of how such a traumatic personal experience can be reduced to a series of arid, intimately detailed arguments at trial

Meanwhile, the ordeal that the young woman had to endure is made plain, not least being interrogated about her bodily functions in front of a public gallery. Despite what must have been a crushing verdict for her, the unnamed woman comes across as resilient and determined not be beaten by her experiences in her testimony. “He was not taking ‘no’ for an answer,” is not a quote that is easily forgotten. As the narrators make clear, the case highlights how the daunting legal system can be a barrier to women making complaints about sexual violence.

Certainly, Kelly and O’Brien’s documentary paints a depressing picture of how such a traumatic personal experience can be reduced to a series of arid, intimately detailed arguments at trial. But if the documentary is tough going emotionally, it’s also a gripping, deftly made piece of public service radio. It suggests that when it comes to sexual assault survivors being well served by due process, the jury is still out.