Soldier’s songs and the War of Independence 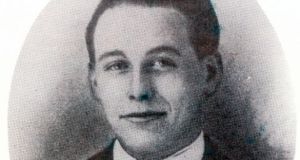 Kevin Barry became a symbol of callous British oppression. The ballad, Kevin Barry illustrates that quite clearly. It quickly became a Republican anthem.

“In Mountjoy Jail one Monday morning,/High upon the gallows tree,/Kevin Barry gave his life/For the cause of liberty”.

This year marks a century since Kevin Barry’s execution for his part in the death of three British soldiers during the War of Independence. Only a teenager, Barry quickly became a symbol of callous British oppression. The ballad, Kevin Barry, quoted above, illustrates that quite clearly. It quickly became a Republican anthem.

Republicanism in the early 20th century was always a culture as much as a campaign. Many developed their politics in language classes, by engaging with Irish history or learning folk dances.

Music was integral to that culture. Firstly, it gave the movement historical legitimacy. The second line of Kevin Barry, “High upon the gallows tree”, quoted a well-known ballad written more than half a century earlier, God Save Ireland (a reference that wouldn’t have been lost on even the least interested listener).

Like Kevin Barry, God Save Ireland commemorated Irish nationalists executed by Britain, in this instance during the Fenian disturbances of the 1860s. Decades separated the Fenians and Kevin Barry, but by linking the lyrics, this song linked the causes. This movement is a continuation of an ongoing struggle for liberty, it told listeners. The British have always behaved this way and brave men like Barry have always stood against them.

Moreover, songs and the ceremonies surrounding them demonstrated that Ireland was a legitimate nation. “Shoot me like a soldier, for I fought to free Ireland”, goes Kevin Barry. Not a rebel or terrorist, a soldier. World War One cemented the noble soldier as the symbol of national honour. Brave “soldiers” like Barry, therefore, made Ireland a nation.

That was driven home in the movement’s anthem, The Soldier’s Song, by Peadar Kearney and Paddy Heaney. Written in 1907, the song was catapulted to national attention after 1916, when Republicanism had explicitly become a movement of the “soldier”.

The Soldier’s Song was the soundtrack to Sinn Féin rallies, a national anthem with a deliberately masculine call for the “sons” and “men” of Ireland to take on the English “Saxon foe”. At communal occasions, with de Valera as the national leader, it conveyed a real sense of a national occasion.

Community was vital. The movement for independence was a broad but fragile church – something events after 1921 made clear. Singing together papered over the cracks. Vague ideological sentiments like “soldiers are we, whose lives are pledged to Ireland” unify diverse crowds and avoid the intricacies of policy making.

Michael Donoghue, one of many Republicans imprisoned for political activities, described one example. In 1920, crowds outside his prison window sang The Soldier’s Song in unison. Most were likely not prepared to use the violent methods the song endorsed and would have preferred not to share Donoghue’s incarceration. Nevertheless, their performance created a shared experience. We’re all in this together, it implied, whatever the real-life caveats.

Prison and music went hand-in-hand and gave an otherwise demoralising experience a sense of purpose. Songs with titles like The Day That We Get Out speak for themselves. One Republican, Patrick Kelly, described how prisoners started singing despite orders from the guards to stop. “Several of them went to punishment cells,” he recalled, “but did not give up”.

It is tempting to picture revolutionaries singing in joyous defiance, mocking their oppressors. We should resist that temptation. Occasions like Kelly described were common but did not represent the daily experiences of most. Indeed, others describe keeping closely to the times during which singing was allowed by guards.

More often, music staved off boredom. Constance Markievicz wrote songs from prison to keep herself entertained and, in Dublin’s Kilmainham Gaol in 1923, Republican women imprisoned by the new Free State kept their spirits up with a concert including some of her compositions.

In Ballykinlar, an internment camp where Republicans were held from 1919, several prisoners learned new instruments. The prisoners even established a violin orchestra (Peadar Kearney, Soldier’s Song writer, was a member) and an entertainment committee to manage the programme.

Even then, we should be cautious. Music distracted prisoners and gave them moments of cheer, but they were still imprisoned. Kearney’s letters to his wife speak to his depression. He missed his children, he was hungry, and when it came to an upcoming concert, he said, he was looking for ways to “avoid it”.

Occasionally, musical activities saw Republicans arrested. This was not the norm, but it illustrates how ham-fisted British rule became. Jack O’Sheehan, arrested for “seditious singing” in 1918, was picked on more for his role in the Republican movement than for his musical repertoire. Regardless, the press covered his arrest, subsequent trial, and its impact on his wife, Molly. She was also a Republican activist, and her story of victimisation did more damage to British interests than arresting her husband could ever have prevented.

Songs also help to establish who is remembered. Who Fears to Speak of Easter Week commemorated the rebels of 1916, while Let Me Carry Your Cross for Ireland carried the memory of Thomas Ashe, who died on hunger strike. Kevin Barry commemorated a martyr. Notably, it deliberately avoided the soldiers he was accused of murdering.

Today, music keeps the revolution in the public mind. The Soldier’s Song, now Amhrán na bhFiann, remains the national anthem, though few who sing it really wish to stand amidst “cannon’s roar” against the “Saxon foe”.

These songs, Kevin Barry included, appeared in Provisional IRA propaganda throughout the Troubles, but they were always part of the mainstream too. A recent campaign sent a nationalist song, A Nation Once Again, to the top of Ireland’s iTunes chart. On BBC One, Alan Partridge appeared singing Come Out Ye Black and Tans, generating a significant viral response online.

Does Republicanism own these songs in 2020? Not necessarily. Despite what Kevin Barry implies, one moment of nationalist drama did not inevitably blend harmoniously into the next. Songs are always up for grabs, something each politician vociferously singing Amhrán na bhFiann knows all too well.

Richard Parfitt, a historian based at the University of Oxford, is the author of Musical Culture and the Spirit of Irish Nationalism 1848-1972 (Routledge, 2020)

Laurel and Hardy – another fine mess: The real story of their final days
5