Patrick Freyne: The royal wedding – or the ginger betrayal of Prince Harry 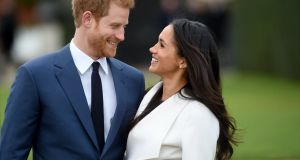 Harry, who will be problematically dressing as Captain Jack Sparrow, and Meghan Markle. Photograph: Facundo Arrizabalaga/EPA

Next month Prince Harry is marrying Meghan Markle and The Irish Times doesn’t even have a royal correspondent. This is a rum state of affairs for a so-called unionist newspaper. So I’m putting my hat in the ring for the position, and just to stress how keen I am, let me add that it’s a large velvet hat with a Union Jack printed on it and the words “Give us a jellied eel, guvnor!” on the back.

On May 19th, Prince Harry, who is, sinisterly, “a bit of a laugh”, is marrying the American television star and German chancellor Meghan Markle. Harry is “fifth in line for the throne”, which is not only a good description of you waiting on the upstairs landing at Kev’s party last Saturday, but also a decent description of where he comes in the royal line of succession.

Harry comes fifth after his father, Prince Charles, Prince William, that eerie Edwardian toddler who dresses like a man (Prince George) and his brother, Elton John.

The Royal Family are, basically, the best family in Britain. It’s long and complicated but the gist of it is that they won Britain in a fight. Prince Harry’s grandmother is the Queen, who is the boss of Britain, and, like the rest of the British people, Harry had to get her consent to marry. There’s loads of people he can’t marry.

Until very recently, British royals couldn’t marry Catholics because transubstantiation really bothered them (“How can people be bread?” yelled the Queen) and because they have their own religion, which is called Anglicanism and was set up by Henry VIII because he loved God so much. They can now marry divorced people, despite how much Henry VIII hated divorce.

Protocol insists we always call by both her names, as though she were a new best friend we just met in creche

The Queen’s husband is Prince Philip, and he is from “another time” and therefore must be kept away from wedding guests from the Commonwealth countries and Twitter.

Prince Harry’s brother is Prince William. He is married to Kate “Kate Middleton” Middleton, whom protocol insists we always call by both her names, as though she were a new best friend we just met in creche.

Prince William is bald, unlike Prince Harry, whose hair is luscious and red like a burning sun.

“No,” says Harry. “Stop your tears and get off your knees. Each man’s hair is his own business.”

This is the central credo of the Anglican faith.

Like Madonna and Bosco and Lassie, and unlike Kate Middleton, the royals don’t have a second name. Instead they get to be called His/Her Royal Highness, which was, coincidentally, your nickname in college (you were going through a “reggae” phase). They are part of the House of Windsor, which means they get a discount when they shop there and are well sorted for crockery. (Editor’s note: are you getting the House of Windsor mixed up with House of Fraser?)

William and Kate Middleton have two children. Prince George of Cambridge is a toddling Lawrence of Arabia lookalike with a V-neck, sleeveless jumper, shorts, a pipe and a senior rank in Her Majesty’s armed forces.

Despite being four years old, Prince George is just one Game of Thrones-style wedding massacre away from ascending the throne and he knows it. As we speak he’s staring out of a window in Windsor, brooding and quoting ominous texts in Latin while swirling a glass of brandy in his delightfully chubby hand.

Then there’s the other one, who doesn’t say much and is thus presumably good at karate.

And there’s a third child, “Royal Baby”, who is, according to sources, en route via royal stork. We know little about “Royal Baby” as yet, though based on previous mid-season casting changes he/she is likely to be sassy and wearing sunglasses. He/she will probably do a rap.

But enough about all that – what will the actual wedding be like? Now, I’m basing this on my experience with previous high-profile weddings – that of William and Kate Middleton, or Kylie and Jason on Neighbours or the marriage at the end of Star Wars: A New Hope between Princess Leia and her husbands Han, Luke, Chewbacca and C3PO.

During the wedding of William and Kate Middleton, William cosplayed as a 19th-century redcoat and Kate Middleton dressed like she was getting her First Communion and everyone was fine with that. But Meghan might need to shake things up a little bit because she’s from the telly.

She could try wearing something iconic like the dress Ginger Spice wore in Spice World or by dressing as one of the Doctor Whos. And instead of using George V’s boring old glass carriage, she could drive up in Del Boy’s van from Only Fools and Horses. Harry will be, as is tradition, problematically dressing as Captain Jack Sparrow.

They will marry in St George’s Chapel in Windsor Castle. St George was a hobo who was famous for beating a rare lizard to death at the behest of a voice in his head, which just goes to show that you can spin any situation to your benefit with a little imagination and some positive thinking (#inspiring).

Meghan and Harry will marry beneath the crest of the British monarch. This represents the indomitable spirit of a nation and features a lion and a unicorn – that is to say, an endangered animal and a fictional one – fighting over possession of some tattered flags (Who said the British establishment has no sense of humour?)

The wedding will be officiated by the Dean of Windsor and the Archbishop of Canterbury, which are other names for Ant and Dec. And Alan Titchmarsh will narrate everything in breathlessly respectful tones whether we want him to or not. He’s doing it now. Can you not hear him? Stop it, Titchmarsh.

There will be many dignitaries present, including Prince Andrew, his ex-wife Fergie from the Black Eyed Peas, Andrew Lloyd Webber, Hugh Grant, Big Ted from Play School, Stephen Fry, Mr T, Dame Judi Dench, The Clangers, the cast of Are You Being Served?, Hall and Oates, Noel Edmonds and Posh Spice. There will also be representatives from Britain’s many vassal states and tax havens. Bono will be there, probably, making a show of us.

The royal family have many enemies. They include: the paparazzi, Pippa Middleton, Jeremy “Red Menace” Corbyn, straight bananas, The Kaiser, sea erosion and burgundy passports. The beefeaters are on high alert and will be trying to keep any of these miscreants from stealing the show on Harry and Meghan’s special day.

This is difficult for them because their arteries are clogged with beef and their tight, colourful costumes make it impossible for them to do effective undercover work.

Still, there will be memorable high jinks as the waddling meat-enthusiasts keep the paps, the Kaiser and Pippa Middleton at bay, all to sounds of the Benny Hill theme, tastefully performed by the choristers of St George’s.

Additional music will be performed by Ed Sheeran, who is, unbeknown to Harry, deeply in love with Meghan Markle, and in an affront to ginger solidarity, will attempt to whisk the alliterative actress from Harry’s regal grasp before flying through a stained-glass window on a sort of steam-powered hang-glider. And who can begrudge the flappy-headed song-monkey his one chance of happiness? Not I.

But perhaps I’m getting off the point. Forgive me. I’m just overcome by the romance of what will certainly be a wonderful day.

David Sedaris’s Lockdown Diary: ‘I destroy everyone I’m a Fitbit friend of’
6

The Climb review: a big-hearted crowd-pleaser in the name of love
Real news has value SUBSCRIBE