Trailer for Irish film, Michael Inside. 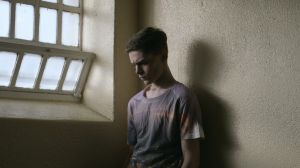 Other films have worked from the same template as Frank Berry’s brilliant, heart-breaking tale of the socially excluded. As in Alan Clarke’s Scum and Jacques Audiard’s A Prophet, a young man is sent to prison and fails to blossom into a model citizen. A grim sense of inevitability hangs over the enterprise: the convict, hitherto at home to possibilities, is tipped on to a steep incline. The best such characters can hope for is to cling on and resist the downwards momentum.

Winner of best film at the recent Irish Film and Television awards (in a competitive year), Michael Inside clears fresh ground amid the familiar vegetation. The picture is technically assured: enveloping score by Daragh O’Toole; oily, claustrophobic camerawork from Tom Comerford; an astonishing lead performance by Dafhyd Flynn. But it is the generous humanism underlying the documentary realism that sets the film apart.

Other such films have researched their material in similar depth. Berry, who has already shown his skills for capturing life on Dublin’s streets in I Used to Live Here, balances rage at the system with an unstinting compassion for his characters.

The film-makers developed the project with Pathways, a prison rehabilitation service, and, although mistakes are made, no cheap shots are taken at the men guarding and processing the prisoners. The film is down on the system. But it allows for decency among all those trying to keep its creaky gears moving.

The film focuses on the grim adventures of young Michael (Flynn), living, while his dad is in jail, with a kindly grandfather (Lalor Roddy) who understands the perils lurking round every ordinary corner.

As the picture begins, Michael, placed on probation after a silly, reckless offence, is making decent efforts to stay on the proper path. Then he makes one relatively small slip-up – storing some drugs for an acquaintance – and finds himself propelled to the rough end of the justice system. He is sentenced to three months inside.

Little in this excellent film is handled quite so well as the grim anticipation of incarceration. Michael’s granddad works hard at reassuring him that it won’t be so bad as he thinks. “There’s a lot of normal people in there,” he says (true enough). He’ll be out soon enough. He need only keep his nose clean. For all these reassurances, the picture makes it clear that Michael, a decent fellow with a gentle manner, is surely about to pass a point of no return. “Forget about buying a house, forget about going to the States. Your sentence only starts when you’re released,” he is later told.

That may be true. But the sentence is horrible enough in itself. For all the bureaucracy, this prison is still run along the same internal rules that governed Jimmy Cagney’s incarceration in White Heat. The hardest nut rules the exercise yard and, in Michael Inside, that turns out to be the justifiably ubiquitous Moe Dunford as the slippery, crafty David. Berry has allowed Dunford the opportunity to flesh out his villain into a disingenuous mass of corrupt charisma. He’s a bad guy. But he’s a bad guy who could wake up any room.

The contrast with Flynn’s more internal performance is marked. Very good-looking, slightly fragile in his build, the young actor rarely allows the inner torment to leak through the taut facade. When it does, the effect is, thus, all the more heartbreaking. Directors will find ways of using Flynn for decades to come.

If one had to gripe, one could argue that the film sometimes allows its social purpose to overpower the demands of narrative and character: Michael is an Everyman in an unforgiving universe. The picture is no less powerful for that.