The countertenor: ‘It’s a Marmite voice – people either love it or hate it’

After Iestyn Davies’s voice broke, finding his falsetto ‘accessed something inside of me’ 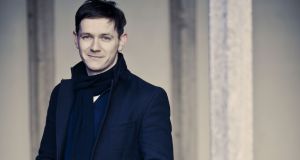 Iestyn Davies: “Somebody sitting beside me said, ‘That sounds all right. You should do it more often.’ ” Photograph: Marco Borggreve

In one way it’s clear what a countertenor is: it’s a man who sings like a woman. But they are not exactly common, certainly not in Ireland. When I ask Iestyn Davies what exactly a countertenor is, he refers first of all to the cathedral tradition before elaborating. “In the work I do – singing in operas and concerts – it covers the range of falsetto singing. A man who sings in his falsetto – basically the opposite to his modal chest voice, his speaking voice – will be singing countertenor.”

There are, of course, pop singers who use falsetto, “but they’re not countertenors, because they use it more as an effect, or because they can’t reach a high note in their tenor voice. In a way, that means a counter tenor is somebody who . . . strengthens their falsetto voice to the point where it is their ‘natural’ singing voice.”

To do it professionally, all the time, you have to really apply yourself

He draws an analogy with sports. “If you’re a high jumper and wanted to be a shot-putter, you’d have to train to be a shot-putter. You could pick up a shot and throw it. But to do it professionally, all the time, you have to really apply yourself.”

Sports specialisations are the outcome of aptitude as well as interest or passion. So how he find out that he was a countertenor? “I was in a choir at school in Somerset. When my voice broke I went from treble to tenor to bass. I just slipped down. I didn’t have a catastrophic break overnight . . . The only singing I did was in that school chamber choir. I had been singing as a boy, so I just kept on as my voice went down.”

It was at the age of 17, when he had already adjusted and thought of himself as a bass, that “I just suddenly felt the access to that voice, to the falsetto. It felt nice and it felt different – no one else did it in our school. It reminded me of what it felt like being a boy, being a treble, singing services and being paid and professional and making recordings, and having that taken away from you when your voice breaks.”

It’s a strange situation to be in, he says. “You’re left with all the musicality and all the musical experience, but you have no vehicle through which to show that.”

It was a transformative experience. “Singing falsetto seemed to access something inside of me . . . That emotion you feel when you sing, that suddenly clicked when I sang falsetto. I felt all kind of warm and rich and good inside . . . And somebody sitting beside me said, ‘That sounds all right. You should do it more often.’ ”

To me, countertenors were the four men standing in the choir behind me. It was quite a sharp learning curve

The death of the castrati

The 20th-century revival of the countertenor as a soloist is attributed to the English singer Alfred Deller (1912-79). Composer Michael Tippett became a fan and in the 1940s organised performances by Deller of music by the 17th-century English composer Henry Purcell. And Deller later inspired Benjamin Britten to write the role of Oberon in his 1960 opera A Midsummer Night’s Dream.

But the countertenor voice never really had an 18th-century flowering to match the proliferation of soloists active today. “Yes, countertenors did sing in Handel’s time. They didn’t sing the operas, but they did sing in the oratorios. In Saul the Royal David was performed by a countertenor, and similarly in Jephtha he had a countertenor sing.

“This is possibly because he was writing in English, and the Italian castrati, who were used to singing the Italian opera seria, weren’t as well-groomed in their English. But it’s also because he worked with a lot of choruses, including the Chapel Royal Choir, and there were a couple of standout soloists.

The tenor and the baritone become the heroic voices

Today’s countertenors sing opera roles that were written in the 18th century for castrati. “It was really the castrati who died out, so that in the 19th century there really aren’t any roles written for a high male voice. The tenor and the baritone become the heroic voices.”

The purity of Scholl

Does he have a favourite singer among countertenors? “I owe a lot to Andreas Scholl. He has such incredible purity throughout his range. And the ability to sound beautiful as a countertenor is so important. It’s often a Marmite voice, people either love it or hate it. People don’t say they don’t like tenors. They either like or don’t like individual singers.”

He jokes when I ask about favourite roles. “Sometimes it’s nice to sing things like Bach’s St John Passion, because you only have two arias, and the second one is so brilliant. You can have a rest. There are still roles that I haven’t sung, like Julius Caesar, which I’m doing in Kilkenny [Arts Festival]. I’ve always loved that piece, and I’m really looking forward to seeing how it feels as the whole thing, rather than just the odd aria here and there.”

He is also full of enthusiasm for his lutenist Thomas Dunford, with whom he will give a concert in Kilkenny. “He’s a spontaneous musician, incredibly musical. I know that we don’t really have to rehearse for a concert. We can stand up and sing songs we know, and they’ll be better for not having rehearsed. That’s the most honest you can get in performance.”