Purple reign comes to an end as Prince dies aged 57 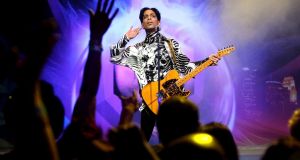 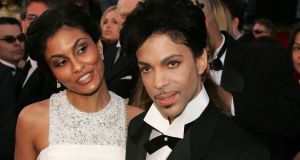 Prince with Manuela Testolini at the Academy Awards in 2005. Photograph: Carlo Allegri/Getty Images

It would be hard to assemble a greater bunch of brilliant contradictions than are embodied in the singular life and person of Prince, who has died at 57 in his Paisley Park home in Minneapolis, US.

A genius of ghetto music who came from the white-bread Midwest; a restless experimenter who could write the sweetest, simplest, most perfect pop tune imaginable.

He was a perfectionist and control freak who, it seemed, could not stem the gushing fountain of music that spilled out in triple albums and simultaneous releases; a heavy-lidded enigma who many reckoned was the most electrifying performer of his generation.

Although he sprang from the great tradition of post-war African-American pop music, and contributed greatly to its evolution into the 21st century, Prince Rogers Nelson himself was sui generis. He was born in Minneapolis into music – his father was a pianist and songwriter and his mother a jazz singer. By the age of 10 he was composing songs and, in his teens, was forming various high school bands with friends and family members.

At his insistence, these bands started playing his originals, influenced by, among others, Sly and the Family Stone, James Brown, Earth, Wind & Fire, Miles Davis, George Clinton and Parliament. Those influences endured in the years and decades that followed.

By the late 1970s, the young Prince was making his breakthrough with a string of raunchy records with explicit (by the standards of the time) lyrics, which often saw him bracketed with the similarly lascivious Rick James.

And there it might have remained, the cheeky young R’n’B star from Minneapolis might have had a few hit records and a solid but not particularly spectacular career in what was still a highly segregated music industry.

But a tipping point was happening in US popular culture, and the young prodigy, with his penchant for oddly spelled titles, his numerous side projects and his extraordinary abilities, was well placed to take advantage.

The colour bar which MTV had placed on black artists crumbled finally under the twin assault of Michael Jackson’s Billie Jean and Prince’s Little Red Corvette, the latter from the multimillion-selling album 1999. The new world was at his feet.

In many ways he was the anti-Jackson, but both of them epitomised a new sort of music, blending shiny metallic pop with driving funk and new studio techniques. The music sounded like the future, and nobody knew how to make it sound better than Prince.

The impact of 1984’s Purple Rain can’t be underestimated; in that album and film Prince told his own legend as he wanted to tell it, in the process making himself the superstar the film said he was. Its music won him an Academy Award and the album sold more than 13 million copies in the US alone.

Songs like When Doves Cry and Let’s Go Crazy were hits all over the world. Around the World in a Day and Parade followed, the latter including possibly his most enduring hit, Kiss. Almost as an afterthought, he was dashing off number ones for other artists, including Manic Monday for The Bangles; and I Feel For You for Chakha Khan. Later, Sinéad O’Connor achieved global fame in 1990 with a recording of another Prince song, Nothing Compares 2 U.

The sheer intensity and quantity of his output must have been unsettling for those around him. Restlessly shuffling and reshuffling his band and collaborators, in 1987, he produced Sign o’ The Times, a complex, multilayered state-of-the-nation double album which was ecstatically received by critics but didn’t sell in quite as many truckloads as its predecessors.

For many, it’s still his best work, with its bleak portrait of poverty and drug addiction.

The following year, he produced then withdrew the Black Album, which he had decided was “evil”, and replaced it within a few weeks with another album, Lovesexy. Asked by Tim Burton for a few songs for his 1989 Batman film, he turned in a nine-song album almost immediately.

Things started getting stranger. In 1993 he changed his stage name to a symbol, explained as a combination of the symbols for male and female.

Warner Bros had to mail floppy disks with the correct font to every media organisation that wanted to mention what became known as “The Artist Formerly Known as Prince”, “TAFKAP”, or simply “The Artist”.

The albums started coming even faster, as part of a strategy to extricate himself from his contract with Warners as quickly as possible. His first post-Warners album was called Emancipation.

He reclaimed his name as the noughties dawned, and live performances became ever more important. The US chart success of the 2004 album Musicology was assisted by the CD being included as part of the concert ticket purchase.

That year Spin named him the greatest frontman of all time and Rolling Stone magazine named him the highest-earning musician in the world, with an annual income of $56.5 million, largely due to his Musicology tour.

The hits might not have kept coming, but the pace did not noticeably slacken. Of the 39 albums he released, four of them were within the last 18 months.

He played his last shows only last week in Atlanta with a solo performance at a purple grand piano, where he sang Heroes in tribute to David Bowie. Back on stage within the hour for his second show, he ended with three encores and a medley of Purple Rain, The Beautiful Ones and Diamonds and Pearls.

What drove this remarkable life of brilliance and eccentricity? “I’m no different to anyone,” he told the New Musical Express in 1993. “Yes, I have fame and wealth and talent, but I certainly don’t consider myself any better than anyone who has no fame, wealth or talent. People fascinate me. They’re amazing! Life fascinates me! And I’m no more fascinated by my own life than by anyone else’s.”