New Artist of the Week: Chai 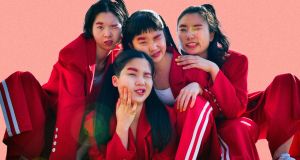 What A 21st century Japanese garage pop band
Where Nagoya, Japan
Why The breakthrough success of Korean pop bands BTS and Blackpink in recent years has opened up doors for Asian artists, alongside the ears of listeners who would have never looked east for musical inspiration. Increased familiarity with the tropes and unique styles of Asian music is at an all-time high, while high-profile musicians like Grimes and Charli XCX collaborate and are inspired by the hybridisation of cross-cultural styles.

Capitalising on those potential open ears in a non-mainstream context are Chai, a Japanese four-piece that have done the same from their own perspective and are attempting to redefine “kawaii” – the cute and bright feminine characteristics that permeate Japanese culture.

To European ears Chai’s music, as heard on their just-released full-length album PUNK, features bright and exuberant melodies galore, but digs beneath the veneer and there’s a strange, cool subversion of expectation.

Chai’s music is a polychromatic take on garage music with electronic and pop production built into its core and turns the hyperactive tones of their country’s music into a unifying infectious force. They cite Devo, Beastie Boys, Basement Jaxx and Abba among their western influences but sound like nothing but themselves.

They sing in English and Japanese interchangeably, though it’s not obvious at first due to their Engrish lyrics, neither is the fact that they are singing about body hair, self-affirmation and beauty standards.

Chai were one of the most talked about successes of the annual music industry showcase SXSW in Texas last week. Perhaps that’s because they are offering something fresh, global and exciting in the face of overwhelming mediocrity and because they’ve turned their Japanese cultural subversion into a superpower.

Elma Orkestra & Ryan Vail: Colours
Two musicians from either side of Derry, Ryan Vail and Eoin O’Callaghan, are two composers and producers who have a common ground in the ambient, electronic and neo-classical genres. Together, they’ve made an an album called Borders about divisions and collaborated with singers Moya Brennan and spoken word artist Stephen James Smith. The title track featuring Brennan bodes well for “scoring the Border between the North and South,” as is their stated intent.