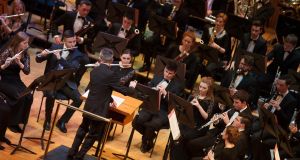 You get the point. The orchestras that get most of the publicity are just the tip of the iceberg. And they are seriously outnumbered by a less-heralded cohort. Just as the great teams in sport are outnumbered by the organisations that operate in local communities or provide an outlet for youth activities.

The Irish Association of Youth Orchestras (IAYO), which was founded back in April 1994 by orchestras from Dublin, Donegal, Galway and Clare, represents more players than can be found in RTÉ and the Army and Garda bands combined.

This year’s festival is the 25th, and the man who’s responsible for managing all of this is the association’s director, Corkman Allin Gray. He works out of the Civic Trust House on Pope’s Quay in Cork, and the Cork base is a deliberate decision which reflects the association’s aim of ensuring it pursues its goals with a non-Dublin-centric outlook.

It’s important that the musicians get to play in the country’s major orchestral venue, and get a good audience, too

The initial vision, he says, was to establish “a community for people to be connected to each other, to share resources, and the first activity was just a newsletter”. The idea for the festival followed pretty quickly and, in spite of it being a quarter of a century old at this stage, “the age profile of the people actually running it on the day is getting younger and younger. Most of our stage crew and quite a lot of our backstage staff came from our first Festival Orchestra, which was specially created in 2015 for the 20th festival.”

The Festival Orchestra is being brought together for only the second time this year, and its players are “nominated by member orchestras from all around the country. There is no audition process. It’s about participation.” It’s important, says Gray, not only that the musicians get to play in the country’s major orchestral venue, but that they get a good audience, too. Count up the numbers of friends and relations and you can see why eight different orchestras are featured each year.

The association’s resources include a bank of around 150 instruments and a music library. “There are a good few violas and double basses, because people don’t buy them.” The way he describes it, people seem to have a blind spot about violas, so the high number is intended as an encouragement. There’s also a good collection of percussion instruments and a selection of rarer wind instruments – the big-size and super small-size clarinets, for instance, which younger players tend not to own. Parts of the collection are out on permanent loan; others are lent out as required.

“We do that mostly because we think chamber music is great, really. Also, for string players, it helps them in taking responsibility for their own playing, so that when they play in the orchestra they can connect with the conductor rather than the person sitting next to them.”

The association focuses on support rather than intervention. Gray says that the availability of music education is spread so unevenly around the country that waiting for local initiatives to take root is actually a better strategy than trying to make a move from above. On the other hand, the IAYO has taken the Irish Youth Wind Ensemble, a national group set up by James Cavanagh and Fred O’Callaghan in the designated European Music Year of 1985, under its wing.

“The Irish Youth Wind Ensemble operates under our banner. It’s owned by the people who run it. But it’s funded through us. It gets its insurance through us. We do the administration and publicity.”

He describes this as providing support for people who are already invested themselves. “I would be very sure that if we tried to take full ownership of it, it wouldn’t work. We don’t have the right connections into the community of wind players. It operates on a collegial basis between teachers and tutors, both in running and tutoring the course, and also in recruiting players to take part.”

She is now the director of the award-winning St Agnes’ Music Project, Crumlin, which she founded in 2006. On Saturday February 22nd and Sunday 23rd, St Agnes’ Community Centre for Music & the Arts will host a gathering of musicians from Belgium, England, Germany, Scotland, Singapore, Spain, the USA and Ireland, hosted by the community centre, IAYO and St Agnes’ Parents String Orchestra.

Forget the whole idea of youth orchestras, professional orchestras, or even the Orchester der Deutschen Kinderärzte (Orchestra of German Pediatricians) founded in 1960, which has attracted leading soloists to work with it and issues a CD of its annual concert.

This is all part of “the musical lunacy of composer Brian Irvine who will devise, create and perform a completely new work from scratch over the course of just a few hours”. Something that would usually strike fear into hardened professionals.

The 25th IAYO Festival of Youth Orchestras is at the National Concert Hall on Saturday February 8th nch.ie