Emer Mayock in Mayo, Andy Irvine in Hollywood and Altan back home in Donegal 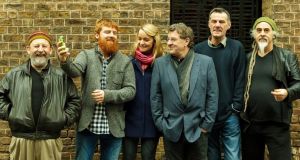 ANDY IRVINE
St Kevin’s Church, Hollywood, Co Wicklow 6pm
The inimitable Irvine, linchpin of so many groundbreaking bands from Sweeney’s Men to Planxty and Mozaik, does what he does best these days: takes his gargantuan songbook and beloved mandolin and guitar to intimate venues such as this for a solo performance. Irvine’s quiet erudition, his remarkable sense of rhythm and his still-pristine voice will find ready purchase in this lovely venue, as a guest of the Music Under the Mountains festival.

STOCKTON’S WING
Dunamaise Arts Centre, Portlaoise, Co Laois
Embarking on their Retrospective tour, revisiting the music of a band who bridged the gap between traditional and contemporary music, introducing it to vast new audiences some 40 years ago. Founder members Mike Hanrahan, Paul Roche and Tommy Hayes will be joined by Paul McSherry, Tara Breen and Karol Lynch for an evening of songs and stories including Beautiful Affair and their more recent single, We Had It All.

ALTAN
Amharclann Ghaoth Dobhair, Gweedore, Co Donegal
Tonight’s homecoming concert celebrates Altan’s remarkable achievements on the world stage, and offer the band a welcome chance to air some of their finest repertoire in the heart of their home turf. Mairéad Ní Mhaonaigh, singer and fiddle player, anchors a band that has documented and augmented the music of Donegal with some beautiful compositions, along with her fellow band members. Support from Crann Óg.