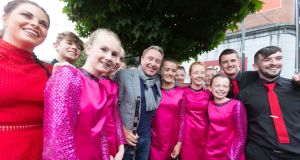 Michael Flatley with members of the Lissycasey Set Dancers at the opening of Fleadh Cheoil 2017 in Ennis on Sunday. Photograph: Eamon Ward

“How cool is this?” Irish dancing maestro Michael Flatley asked as he surveyed a crowd of over 10,000 music enthusiasts before kickstarting the 2017 Fleadh Cheoil na hÉireann in Ennis, Co Clare, with some virtuoso flute playing.

On stage on the fleadh’s gig rig in Ennis’s Abbey Street car park on Sunday, Mr Flatley told the crowd that it was festivals like this “that bring joy into our lives and into our hearts, and that mean so much to many people”.

Over the next week Ennis will be epicentre of the Irish music world where 10,000 session musicians will play, including 3,000 competitors who will play, sing or dance for all-Ireland glory in 180 competitions.

It is the second year in a row that the fleadh has been staged in Ennis after a break of 39 years, and Flatley competed in the town in 1977 as an 18-year-old concert flute player.

On Sunday he returned as an Irish traditional music superstar, and confessed that at the beginning, he did not want to play Irish music and hinted that it was the gentle cajoling of his late parents that had him start out.

He told the crowd: “Sadly my parents passed away last year, but they have given me everything, and without my mum and dad I would have nothing and I would be nothing, and for any young people here today, if you listen to your parents they will never steer you wrong.

“In the very beginning, I didn’t want to play music, and now I am so honoured and delighted that I do.”

Flatley paid tribute to fleadh organisers Comhaltas for bringing Irish traditional music to Chicago when he was young, which brought “that little ray of sunlight into our lives”.

“They are the ones that got me started, and most of you here will have benefited from that wonderful, wonderful organisation.”

Earlier, off Ennis’s O’Connell Street at Custy’s traditional music shop, John O’Connor said the fleadh would reveal over the next days “the musical tentacles of Irish music that enrapture the world”.

“I am not just talking about the diaspora here. Last year we had two Japanese ceilí bands that just blew the place apart with their sound. They were full of exuberance.”

Wowing onlookers with her concertina playing on the streets of Ennis was Clara Butler (10) from Crusheen, Co Clare. Taking part in the rich tradition of children busking on the streets of the fleadh, Clara said she hoped to join her “music mad” sister and brother in future fleadh competitions. “I feel so happy when I play the concertina.”

Clara busked for an hour and was able to buy a fleadh hoodie with her earnings.