Britney Spears at 3Arena, Dublin: everything you need to know 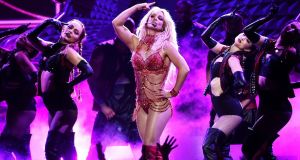 Britney Spear’s is bringing a version of her Las Vegas residency show to Dublin’s 3Arena.

The last time Britney Spears played Dublin, it was 2011 and it was not her best outing. As a megafan, I can put my hands up and admit that. It was not her best performance. However, her latest Piece of Me tour, a reworking of her Las Vegas residency show, sees Spears at the best she’s been in years.

Despite the release of 2016’s Glory, Piece of Me is a deep dive into Spears’s and her fans’s favourite songs. Throwing out Breathe on Me and Touch of my Hand, album tracks from 2003’s In the Zone, and placing them alongside massive singles like Womaniser and I’m a Slave 4 U, this is essentially a tour for the fans, rather than a greatest hits show for fair-weather fans. With life beaming behind her eyes, dance moves so fluid they’d hydrate a corpse and hair flips that would make a grown man cry, Spears is at the top of her game and this tour is a celebration of that.

It’s 11 years since Spears’s public breakdown, which saw the then 25-year-old shave off her own hair in a salon, and while it’s unlikely that that part of her narrative will ever go away, the longevity of Piece of Me shows a star that’s stronger than ever before. More than a success story, hers is a survival story.

Despite the poor planning of this gig landing on a Monday night, there are plenty of after parties happening in town for fans, including the It’s the Britney Afterparty, B*tch happening in PrHomo in The Hub, Temple bar. So now that you know what to do after the concert, here’s everything you need to know before Britney Spears’s gig on Monday, 20th August in Dublin’s 3Arena.

Are tickets still available?
Even though this gig initially sold out on the day of its release, more tickets have been released and are available to buy on Ticketmaster for €88.50.

What time does everything kick off?
Doors open at 6.30pm and support comes from Mr. Worldwide himself – that’s Pitbull,if you’re not in the know – and he’s expected onstage at 8pm. Spears is due to arrive onstage at 9pm.

How do I get there?
There is parking available in the Point Village car park (you can prebook through Ticketmaster for €12) but gig-goers are encouraged to leave their cars at home and to use the red line Luas or use Dublin Bus. The 151 operates every 10 minutes during rush hour and it will drop you on Castleforbes Road, the closest stop to the venue.

What about security?
Bags will be searched upon entry. Bottles, cans, selfie sticks, large umbrellas, iPads/tablets, video cameras, professional cameras (lens 35mm or more), audio recording devices, Go-Pro, large posters (A3+), large flags on poles, belt chains, laser pointers and anything that can be deemed a weapon are prohibited. So pack light to keep the wait in line as short as possible.

What is she likely to play?
Never one to stray far from a setlist, Spears has been playing the same running order of songs since taking Piece of Me out of Vegas. Here’s what to expect: