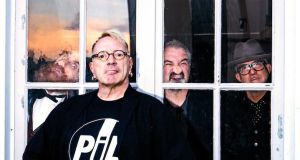 Galway band Dott is but one of many under-the-radar music acts that possess the skill and chutzpah to create sprightly, harmonious garage-guitar pop that lodges in the head and refuses to vacate. This show is a validation of sorts, as it officially launches their recently released second album, Heart Swell, the follow-up to 2013’s debut, Swoon. Special guests include PowPig and Shrug Life, two fine bands that – along with Dott – deftly showcase the current vital state of Irish indie music. TCL

Celebrating its 40th anniversary, and still fronted by the ebullient figure that is John Lydon, Public Image Ltd said goodbye to Lydon’s former band The Sex Pistols so quickly that there was little time to think. We still reckon the band’s debut single, Public Image, is the best post-punk song out there (as well as the best thing PiL has ever done), but there have been a few others that just about match it. This is the band’s first Dublin show in five years, and, from experience, we know that Lydon on stage is good value. A fine venue, too, to see a true iconoclast up close and personal. TCL

Having spent some time travelling the world playing festivals and supporting the likes of Hozier, Hiatus Kaiyote, Mighty Oaks and Alice Phoebe Lou, the Australian singer-songwriter Jackson Dyer bid a temporary goodbye to his Berlin home and went Down Under to work on his own material from his forthcoming debut album, inspired by the landscape of New South Wales. You can hear his new material – and hear a few tales – in Connolly’s of Leap. LB

Fans of US indie rock bands will be familiar with not only the name of Buck Meek but also the band he is still a member of: Big Thief. With two well-received albums (2016’s Masterpiece, 2017’s Capacity – which ended up in Spin magazine’s Best 50 Albums of 2017 list), you might think that Meek has a busy enough time of it, but his recently released (self-titled) debut album has added to his schedule as well as his prestige. Anyone expecting flights of indie rock fancy might be disappointed, as Meek’s solo work veers more in the direction of blues/roots/jazz tunes invested with lyrics that convey valuable accounts of (as the man himself would say) “best friends, barflies, neighbourhood heroes, and troublemakers”. TCL

The Cootehill Arts Festival began in 1988 and has continued (bar a decade’s hiatus from 2006 to 2015) to present an eclectic programme of events. As part of this year’s music schedule, Glen Hansard performs under the umbrella title of “Come on Up to the House”, which sees him headline a variety bill (of sorts) that on Sunday night includes Cavan singer Lisa O’Neill and New York/Irish trad/folk duo The Murphy Beds (aka Eamon O’Leary and Jefferson Hamer). Take it away, folks! TCL

How Seattle all-female band Thunderpussy got its name is, says the band’s lead guitarist Whitney Petty, “shrouded in myth, legend and pot smoke”, as well as admitting its status of equal parts grin and confrontation. Formed four years ago, the music is a mix of rock and punk, with influences ranging from Against Me and Green Day to Bikini Kill. This being their Irish debut, you are advised to check them out and give them a rousing, if not riotous Irish welcome. And while you’re at, head over to the band’s merch desk and avail of, yes, that’s right – “Thunderwear”. TCL

Blending 1960s “girl group” music and Etta James’s take on R&B/soul with a greasy garage-rock sensibility, California’s Shannon & The Clams have been wowing the crowds for over 10 years. Between six well-received albums (this year’s Onion being the latest) and a continuous sequence of live shows, you will be hard-pressed to experience a band more rooted in the push and pull of passion than this lot. If we are lucky, lead singer Shannon Shaw will perform a tune or two from her recently released solo album, Shannon in Nashville (but if not, we are still in for a wild time). TCL

Portland, Oregon-based guitarist and songwriter Marisa Anderson has learned experiences the hard way: from the ages of 19-29, she had no fixed address, but rather hitched her way from town to town, city to city, living in buses, tents, campervans, and whatever else had some kind of a roof over her head. Her trusted companion throughout that decade (as well as before and after) was her six-string guitar, with which she creates a gorgeous strain of blues, country, jazz and gospel. Her most recent album, says her record company (Thrill Jockey), is “an ode to stillness in an era of ceaseless noise”. Investigate at your pleasure. TCL

UK-based art-pop group Five Grand Stereo takes a novel if smart approach to music. The idea behind the band, notes lead songwriter, Dubliner Chris Singleton, is to push a 1970s band into “a time machine, deposit them in the present day, and ask them to make a record about the world they find themselves in.” FGS’s debut album, Sex and Money, was released earlier this year, and totally engaged the listener with its blend of consummate musicianship and whip-smart pop songs. The band also plays the Salty Dog Stage at the Electric Picnic festival on Friday August 31st. TCL

The Peace Pagoda: presented by Algorithm

Curated and produced by the dynamic visual artists of Algorithm, The Peace Pagoda serves as a decent daytime chillout spot and it takes on a new lease of life as nighttime falls. Running all weekend long, with ambient and electronic music filling the bill until 4am each night, the stage will have images projected on it to enhance its performers’ sets. With music from Neil Flynn, R Kitt and Wastefellow, go here to escape the mania elsewhere. LB

For the first year ever, Jerry Fish’s Electric Sideshow is introducing Sideshow Disco, a late night disco-driven party. Perfect. Just what you need on top of a long day of dancin’. With Colin Perkins playing on the Friday night and the Mother DJs and the Get Down Edits popping up across the weekend between the hours of midnight and 4am, the Sideshow Disco should be one of your top destinations once the main stage shuts down for the night. LB

Kicking off at 11.45pm, the Super Extra Bonus Party lads are bound to rev the crowd that needs the least rev – the Friday night gang. Before the word hangover manifests itself into an actual state of being, the Friday night gang still have clean hair, fresh faces and high hopes. It won’t take much for SEBP to get them going but, thankfully, they’ve a bounty of indie-electro tunes to titillate your senses. LB

Showcasing up-and-coming and unsigned acts in Ireland, the Play the Picnic Stage will ensure that you’ve some new acts to take home with you along with the dried muck in your wellies. With Abner Brown curating Friday’s stage, you can catch Blackcat, Laura Elizabeth Hughes, Shakalak and many others between the hours of 4pm and 4am. Saturday’s line-up, curated by Music Maker, features girlfriend and WOLFF, and Sunday’s picks by King Kong Club include Beauty Sleep and Bodies. LB

Tucked away in the woods of Electric Picnic lies the church of Other Voices. Experts in taking big, local and unknown acts, the team at Other Voices assist those acts in putting on intimate and cerebral performances that feel like they’re a million miles away from the rest of the festival. Across the weekend, you can catch the incredible Dowry (Ená Brennan), Seamus Fogarty and Kormac putting on a special performance of his Equivalent Exchange. LB