Avenged Sevenfold on storming The Stage and surviving Trump

In advance of the opening night of The Stage world tour, Avenged Sevenfold's Synyster Gates talks about what fans can expect and about the band's late drummer Jimmy 'the Rev' Sullivan. Video: Ronan McGreevy 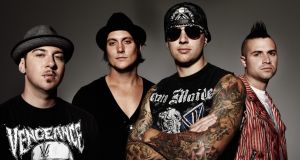 How did you manage to make this album without the world finding out about it?
We kept it very quiet and it was a very difficult task. It is harder than people can imagine. There are so many people involved in making an album and naturally all you want to do is show it to your friends and family. You just can’t do any of that because all it takes is one morsel of information on the internet. Within seconds it’s around the whole world. We had to be very careful. Pretty much anyone who was involved in working on the album or was under the same roof as us were the only people who knew it was happening. A very small, select few people knew about the album.

The Stage is 71 minutes long. Is it your most ambitious album musically to date?
In terms of content and instrumentation, I feel we have been extremely ambitious on every one of our albums going back to high school. We were the first screaming hardcore band to put a big ballad on our record. This album definitely pushes us to our own limits. There are songs here that are over 15 minutes long. Our first radio single, The Stage, was eight-and-a-half minutes long. Unabashedly, we wanted to push the limits musically, lyrically and instrumentation-wise.

Who came up with the concept?
Me and Matt (lead singer M Shadows) were on an airplane. I would often share the books I was reading with him. We were really getting into ideas about evolution and science and the age of our planet. I came across an article and I sent to him. He really enjoyed it. He started looking into artificial intelligence. The next thing you know, he was really inspired.

He said, ‘what do you think if we had more of a theme to this album? What if we had an album that was about what was truly happening with mankind?’ We thought to ourselves and then we said, ‘Absolutely, it sounds awesome’.

Every album is a learning experience. We are so proud of this album for different reasons. As far as guitar work goes, this is definitely a point in our history where we are pushing our own personal boundaries of playing. We have reached a level where people are saying, ‘wow you guys are doing things that we have just not heard from other guitarists’.

We never set out to do that. That’s just from years of practising and playing and pushing each other as musicians. When you start running out of things to do on a guitar, you have to find other ways of making music with your instrument.

How did the 15-minute spoken word insert from Neil De Grasse Tyson appear on the song Exist?
We wanted to write a song that took you on a journey from the beginning of the universe – from the Big Bang through to all the madness and turbulence of a white-hot universe to when it began cooling down to where we could currently float in space on this planet. We wanted to take you on this crazy ride.

It starts off extremely fast. It gets heavy and turbulent and then it calms down and all of a sudden, when the vocals come, nine minutes into the song, it brings you this serene, melancholy place. That is ultimately a very uplifting, almost optimistic beat wishing everyone hopes of a better future instead of dealing with the problems on a daily basis that are so minuscule yet mean so much to people - bickering and fighting over things that don’t matter. People should look at the bigger picture of where we are at. It’s definitely a song where you put on our headphones and listen to the whole thing.

Most fans see you as the rhythm man and Synyster Gates as the lead man in Avenged Sevenfold. Is that a fair assessment?
Yes I think that’s a fair assessment. I do play a lot of duelling leads along with him. My comfort zone is playing back in the pocket, playing rhythm. I take great pride in keeping up with a lot of what he is able to do. He is an incredible guitar player. I have never had the ambition to solo.

I don’t care about it. It is a funny thing because he (Gates) is a trained musician. I’m a kind of a punk-rock kid who has never taken a lesson. That’s what makes our band dynamic so interesting.

I love guitarists such as Slash and Dimebag from Pantera. What they do is incredible, but I’d rather remain a fan of those guys rather than try to be up there keeping up with them. I’m very happy with what I do.

Synyster Gates is considered by many to be one of the best guitar players in the world right now. Is that hyperbole?
I agree. He is an incredible guitarist. He has a unique style. He is always pushing the boundaries. Some of the lead guitarists will come to me and I sit with him in the studio when he is working on his solos. I tell him what’s cool and what I like. When it comes to the time for me to learn it, it is always challenging. It always blows my mind. He is always a star when it comes to guitar.

You have been together as a band since high school, though you have changed drummers a few times. Are you still friends after all these years?
Absolutely. We have one thing that a lot of bands don’t. We are first and foremost friends. We have been through everything together. We have grown up together as kids and now we have our own kids who play together. It is an incredible dynamic and it’s hard. We are all extremely good at what we do for Avenged Sevenfold. Everybody has a unique and different task. We are all ambitious and have different ideas. We take a lot of pride and passion in what we do.

Sometimes you have to take a step back and realise that we are friends and that we are all trying to do the same thing. A lot of bands do not have that dynamic. They fight and bitch with each other. For us, if we have a difference of opinion, we figure it out. We always do what is best for the band.

Your old record label Warner Brothers has brought out The Best of 2005-2013, a greatest hits collection. Should fans buy that album?
I would advise against it. It’s up to the fans. It was something the labels had done to kind of spite us. They heard about the fake record release date online so they scrambled to put together their greatest hits and undercut us by a week to confuse our fans. I don’t care about selling our fans a CD or taking their money. To me as an artist, I want to give them quality music and quality items. It’s very tacky to try and take advantage of the band. I absolutely don’t condone it.

As an American, how do the words ‘President Donald Trump’ sound to you?
It’s a very scary phrase. Time will tell, but all I can hope for is that Americans and people across the entire world, aside from whoever is the president, do right by each other. Because, at the end of the day, all my relationships here with people from all places of the world, only I can influence those today and tomorrow. It is really up to me. That guy (Trump) can do what he pleases, but as long as the majority of people stick together and try and be good people to each other, then I think all of that will be irrelevant.

- Avenged Sevenfold, supported by Disturbed, kick off their European Tour 2017 in Dublin’s 3Arena on Saturday, January 7th. The Stage is out now on Capitol Records.