Why have thousands of archaeological sites ‘disappeared’?

While the archaeologists have been busy finding new monuments of interest, the State has been busy facilitating their systematic removal 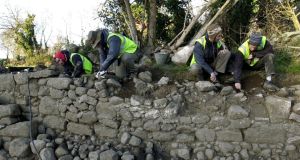 According to the legal definition, there are five alternative criteria under which a monument qualifies as a national monument. Defying alphabetical order, “historical interest” is the first listed criterion. In 2003 the Carrickmines Castle site was recognised as a national monument before the Supreme Court. And now we are launching the history of the settlement and fortification, its long-term occupants the Walshes, their cousins in Shanganagh, Kilgobbin, Balally, etc, and, among many other players, that of the besieger of Carrickmines in March 1642, Sir Simon Harcourt. It is a colourful story, with a big finale. Truly, a site worthy of its national monument status.

And yet, the site, the national monument, is no more, save for some sad remnants, scattered about a busy roundabout. Ah yes, the Carrickmines junction. A junction not connecting with any national routes or, indeed, with a road of any significance. A junction whose planning origins remain unknown despite the best efforts of the Flood-Mahon tribunal. One of a daisy-chain of junctions along a motorway originally designed to carry national traffic unimpeded around Dublin city. A junction that effectively destroyed the integrity of the national monument. How did this happen?

The National Monuments Act, passed in 1930, brought legal protection to our ancient built heritage. On a number of subsequent occasions the Act was amended and strengthened to remove weaknesses and loopholes. Particular credit should go to former ministers Michael D Higgins and Síle de Valera for their significant contributions to the protective legislation.

But in 2004 then government minister Martin Cullen introduced a new amendment to the Act. In direct contrast to all previous amendments, Cullen, in effect, weakened the level of protection afforded to our monuments and historical sites. Henceforth, the relevant minister would not be restricted to evaluating a monument on cultural or heritage merits alone. At the discretion of the minister, the “public interest” card could now be played, even if this entailed the monument being “injured”, “interfered” with, or “destroyed”. There could be no redress, no arbitration. There would be no impartial ombudsman, no cultural court of appeal. One minister of the day could authorise the removal of an ancient monument, including national monuments, for all time.

This State never fails to flaunt and trade on the great history and heritage of the island. Fáilte Ireland relentlessly sells it abroad, Ireland’s Ancient East being one example. Tourists are encouraged to visit our ancient monuments and historic sites. And yet, as tourism has constantly grown, our menu of sites to visit remains painfully static.

The truth is that most have been physically removed. Are we to believe, therefore, that they were not worth keeping? That thousands of sites deserved nothing more than a dusty report on a shelf? That evaluation would mean that a serious financial investment in archaeological field investigation, and we’re talking multimillions here, has had the most miserable return in terms of visitor-destination-creation value for money. Clearly, we need more and more new sites of historical and/or archaeological interest to cater to an ever-growing number of visitors to our shores. Yet, while the archaeologists have been busy finding these new monuments of interest, the State has been busy facilitating their systematic removal.

New discoveries are entered on the SMR (sites and monuments record). But to be afforded a modicum of legal protection they have to be elevated to the RMP (record of monuments and places) or the RHM (register of historic monuments). On the grounds that the National Monuments Act will be revised in “the very near future”, no new monuments have been added to either the RMP or the RHM for many, many years. Thus, all the new surviving discoveries are currently only granted a derisory level of legal protection, if any. According to one answer supplied by the government in response to a series of parliamentary questions submitted by Independent TD Tommy Broughan, 3,862 new monuments have been added to the SMR in the past five years alone. These monuments all remain in a legal limbo.

Surely it is unacceptable that not even monuments of particular note have been promoted from the SMR to the RMP/RHM over these past years? Only two monuments in the same period have been awarded the almost magical status of national monument. Are the rest so mediocre that they must take their chances pending final accreditation?

The relevant minister can, of course, place a preservation order, or even a temporary preservation order, on an exceptional monument. But, as the figures clearly show, this simply isn’t happening. The system is not working. It is totally unacceptable that the fate of a monument is subject to the decision of one minister. The National Monuments (Amendment) Act 2004 states: “the minister is not restricted to archaeological considerations alone but is entitled to consider the public interest”. But who exactly determines what the public interest is? It would appear from cases that have arisen to date that the decision-making, as recently practised, is firmly rooted in terms of financial considerations alone. Surely the cultural and heritage aspects of an exceptional monument or historical landscape should transcend base financial criteria?

It is totally unacceptable that there is no cultural court of appeal or cultural ombudsman to adjudicate on the fate of disputed sites and monuments. The legal protection afforded by the courts prior to Cullen’s 2004 amendment to the Act is gone. This was made crystal clear in the ruling by the Court of Appeal in relation to the 1916 Moore Street site. It was ruled that despite the site having been declared a national monument, its full extent or historical landscape could be defined only by the relevant minister. The court concluded that, as the law stands, it was a matter of “a purely political assessment”. This political imperative cannot be allowed to endure unfettered. How can it be appropriate that the minister who has granted an excavation licence on strict archaeological conditions is also the authority who can subsequently issue the destruction order for the same monument, in direct contravention of the terms of the original licence?

Monuments that can be thousands of years old, and are, by their geographic and cultural affinities, intrinsic elements of the very fabric of this nation, can reasonably be defined as national resources. Ownership of national resources is vested in the Irish people by the Constitution. These cultural treasures deserve our respect and protection, even if it is against our own agents. It is time to restore the credibility of the National Monuments Act. It is time to introduce checks and balances into the system. Failure to do so puts us firmly into the camp of the philistines, or their modern equivalents.

Dr Mark Clinton is the author of Carrickmines Castle – Rise and Fall. He was director of excavations at the castle from 2000 to 2002