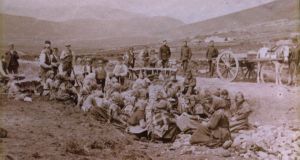 A previously unseen image of relief works on Achill was taken in the Slievemore area, close to the famous deserted village. It shows women breaking stones for men to lay to make a road, all overseen by three Royal Irish Constabulary men. 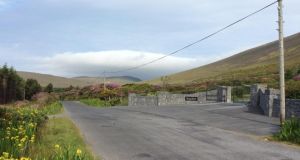 When almost 2,000 runners pass by the location in this photograph when they compete in the Achill Half Marathon and 10K race on Saturday, July 4th, they may be unaware of the origin of the road.

A previously unseen image of relief works on Achill taken around 1880 has been discovered in the personal effects of painter Alexander Williams.

The photograph was taken in the Slievemore area of Achill Island, close to the famous deserted village. It shows a group of women breaking stones for the men to lay to make a road, all overseen by three Royal Irish Constabulary men.

It is not known if the photograph was taken by Williams himself or another visiting photographer, nor is it known when.

Alexander Williams RHA (1846-1930) is best remembered as a landscape and marine painter, but he was also an ornithologist, taxidermist and photographer.

Best guesses locally suggest the photograph was taken in the 1880s when many local roads, bridges and piers were built as part of the post-Famine relief works for the poor.