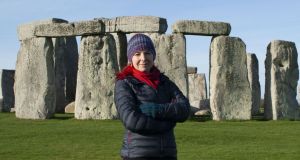 An ancient myth about Stonehenge, first recorded 900 years ago, tells of the wizard Merlin leading men to Ireland to capture a magical stone circle called the Giants’ Dance and rebuilding it in western England as a memorial to the dead.

Geoffrey of Monmouth’s account had been dismissed, partly because he was wrong on other historical facts, although the bluestones of the monument came from a region of Wales that was considered Irish territory in his day.

Now a vast stone circle created by our Neolithic ancestors has been discovered in Wales with features suggesting that the 12th-century legend may not be complete fantasy.

Its diameter of 110m is identical to the ditch that encloses Stonehenge, and it is aligned on the midsummer solstice sunrise, just like the Wiltshire monument.

A series of buried stone holes that follow the circle’s outline has been unearthed, with shapes that can be linked to Stonehenge’s bluestone pillars. One of them bears an imprint in its base that matches the unusual cross section of a Stonehenge bluestone “like a key in a lock”, the archaeologists discovered.

Mike Parker Pearson, a professor of British later prehistory at University College London, says: “I’ve been researching Stonehenge for 20 years now, and this really is the most exciting thing we’ve ever found.”

The evidence backs a century-old theory that the great prehistoric monument was built in Wales and venerated for hundreds of years before being dismantled and dragged to Wiltshire, where it was resurrected as a second-hand monument.

Geoffrey had written of “stones of a vast magnitude” in his History of the Kings of Britain, which popularised the legend of King Arthur but is considered as much myth as historical fact.

Parker Pearson says there may well be a “tiny grain” of truth in Geoffrey’s account of Stonehenge: “My word, it’s tempting to believe it… We may well have just found what Geoffrey called the Giants’ Dance.”

The discovery will be published in Antiquity, the peer-reviewed journal of world archaeology, and explored in a documentary on BBC Two on Friday presented by Prof Alice Roberts.

A century ago the geologist Herbert Thomas established that the spotted dolerite bluestones at Stonehenge originated in the Preseli hills of Pembrokshire, where, he suspected, they had originally formed a “venerated stone circle”.

The newly discovered circle – one of the largest ever constructed in Britain – is about 5km from the Preseli quarries from which the bluestones were extracted before being dragged more than 225km to Salisbury Plain some 5,000 years ago.

In 2015 Parker Pearson’s team discovered a series of recesses in the outcrops of Carn Goedog and Craig Rhos-y-felin with similar stones that the prehistoric builders extracted but left behind. Carbonised hazelnut shells – the charred remains of a Neolithic snack from the quarry workers’ campfires – were radiocarbon-dated to 3300 BC, meaning the bluestones had been quarried almost four centuries before Stonehenge was constructed.

It convinced Parker Pearson in 2015 that “somewhere near the quarries there is the first Stonehenge and that what we’re seeing at Stonehenge is a second-hand monument”.

He says: “How else do you explain that the stones come from a series of quarries 140 miles away as the crow flies, if there isn’t some other kind of relationship?’ It just struck me that surely there has to be a stone circle.”

Over many years Parker Pearson and his team of professional archaeologists, students and volunteers explored every conceivable Preseli site in a needle-in-a-haystack search.

To see the invisible, they used the most advanced scientific techniques, but they failed to reveal anything in the unyielding soil around a site named Waun Mawn. It still has four monoliths, three now recumbent. A century ago a suggestion that these were remnants of a stone circle was dismissed.

But the theory was proved correct. Parker Pearson refused to give up and resorted to tried-and-tested digging around those monoliths. “We were lucky, because this circle had four stones still left. If they’d taken them to Wiltshire we would never have found the circle’s stone holes, and I doubt archaeologists would have stumbled across this for centuries to come.”

The acidic soil had destroyed almost all organic matter that could have been carbon-dated. But traces of ancient sunlight lingering in the soil was analysed and gave a likely construction date of around 3300BC, finally confirming Stonehenge’s secret, lost history. – Guardian

Stonehenge: The Lost Circle Revealed is on BBC Two at 9pm today