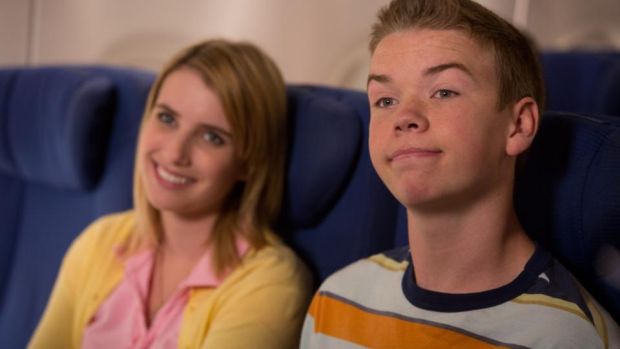 Emma Roberts and Will Poulter in We’re the Millers

The Jennifer Aniston romantic comedy has become such a familiarly terrible entity that it now almost constitutes its own genre: flinty Jen and her brutish neighbour/ colleague/teammate squabble furiously before eventually falling into each other’s arms. As the JenComs have got worse, her God-given gift for comic timing has become ever more deeply buried in the sludge. What price a comeback?

We’re the Millers comes close to delivering. The plot does pull off the unhappy trick of meandering wildly while still taking exactly the route you knew it was going to take. At one point, Aniston – in a sequence of breathtaking gratuitousness – is presented as the sort of sex object that might give the editors of Nuts pause for thought. But the central conceit is well established, the comedy is often impressively sour and the four leads complement one another beautifully.

It must have been an easy film to pitch. Here’s the skinny: low-level pot-dealer Jason Sudeikis is forced to transport a huge batch of weed from Mexico to his native Denver. He decides the best plan is to assemble a fake, white-bread family – the sort that would never be stopped by customs – and pile them into a recreational vehicle for a bogus vacation. After some wheedling, he persuades Aniston (unlikely stripper), Emma Roberts (grumpy, homeless goth) and Will Poulter (sweet-hearted dweeb) to pose as wife, daughter and son.

The actors form a smashing comic collective. Roberts, who has always seemed underpowered to date, does a magnificent line in crooked-mouthed fury. Sudeikis is nicely exasperated. Aniston gets to exercise her way with a furious rejoinder. And the hilarious, touching Will Poulter – so good in Son of Rambow – confirms that he is among the best British actors of his generation.

The film’s swipes at traditional family values are refreshingly aggressive throughout. But one can’t help wishing that the four-headed lead had a script worthy of its mighty potential. It’s always possible that the inevitable sequel – We’re the Millers is already a hit in the US – might deliver in that regard. Very slightly stranger things have happened. Though not often.

Reopening Highlanes Gallery: ‘The way we see crowds has changed’