The Mummy: Story of the world’s most expensive movie poster

An original lithograph of the 1932 classic is set to sell for $1-1.5m, a record-breaking sum 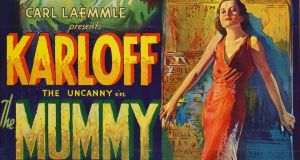 An detail from the original 1932 lithographic film poster designed by Karoly Grosz, for the movie ‘The Mummy’

Auction house Sotheby’s is currently accepting bids for one of three remaining original posters of 1932’s The Mummy. It is expected to sell for somewhere between $1m-$1.5m, making it the world’s most expensive movie poster. It’s a scary amount of money.

Ownership comes with no curse; this specific print, which will be the first movie poster to valued in the seven figures, was bought at auction in 1997 for $453,500. You can buy a gold-plated sarcophagus with that kind of profit margin.

Sam Sarowitz, author of Translating Hollywood: The World of Movie Posters and owner of Posteritati, a high-end boutique of original posters in Lower Manhattan, is excited. “It’s big news we’ve been following; hopefully the thing won’t shred once it’s sold!”

Jokes about Sotheby’s aside, Sarowitz sees the attention as good for his business, and good exposure for film posters as art.

“Classic Universal horror films of the 1930s are the golden fleece of movie posters, and very few copies survived,” he said. “They were never released to the public, unlike other pop culture collectibles like baseball cards or comic books. They were just tossed away; cranked out and unjustly treated like ephemera.”

The poster in question is a lithograph, a fine art printing method with richer inks and a higher quality paper than what is used today. Movie studios phased the method out by the 1940s. It was designed by Karoly Grosz, the advertising art director at Universal responsible for a number of prints from the era.

“It’s a remarkable piece,” according to Sarowitz. “You have the monster taking up one half, the damsel on the other, the title treatment is beautiful and that tagline: ‘It comes to life!’ It’s everything you could want in a poster.”

Phil Nobile Jr, editor-in-chief and creative director at the newly revived horror journal Fangoria agrees. “Universal horror was lighting in a bottle,” he says, referring to films like Dracula, Frankenstein, The Mummy and The Invisible Man. “Nothing else had that look. They were the first icons; you had influence from German technicians coming over and performers like Bela Lugosi and Boris Karloff, whose mercurial look got him cast as a range of ethnicities.

“Before he was cast in Frankenstein he was literally a starving artist, eating one can of soup a day. He’d drink the broth in the afternoon and save the vegetables and meat for the evening.”

The Mummy, while more than a bit Orientalist upon reflection, was inspired by the Egyptian-chic of the time. Howard Carter’s discovery of Tutankhamun’s Tomb was just ten years prior to the film’s release. Boris Karloff plays the risen Egyptian high priest Imhotep who is brought back to life by hubristic explorers. Trouble ensues. It’s quite corny at first and then we get those close-ups of Karloff as his false identity Ardeth Bay and the movie has you (you were waiting for this) under wraps.

Britain’s Hammer Films produced four Mummy pictures in the 1960s and 1970s (distributed by Universal), then there was the Brendan Fraser trilogy in the late 1990s. Finally there was last year’s unfortunate Tom Cruise reboot that was intended to launch the Dark Universe franchise.

“We ingest movies differently today,” Nobile Jr continues. “The life cycle of a movie usually ends the Monday after it comes out. With the Universal monsters, the films were re-released constantly. The first time was 1939 and there were lines around the block. That’s what inspired Son of Frankenstein and then the second wave, like The Wolf Man.”

“Today’s wide-release movie posters all suffer from what we call ‘The Curse of the Floating Heads’,” Sarowitz sighs. “Tom Cruise’s head is there in the center, it all looks slapdash and done by committee.” While the most expensive thing you’ll currently find at Posteritati is an original 1933 King Kong from Argentina listed at $75,000, Sarowitz doesn’t blanche at Sotheby’s ask. “If anything, it’s underpriced!”

Fangoria’s editor-in-chief agrees. “At a certain point, it’s splitting hairs. To normal people like us it’s all a dream, but if news of a million dollar movie poster gets this great, tight movie with a fantastic Karloff performance on the radar of someone who wouldn’t normally watch it, how can that be bad?” – Guardian

Dua Lipa: ‘You have to be made of steel to not let words get to you’
10