Mandy: Nicolas Cage is incredible in this audacious revenge flick

Review: The actor gives the most heartfelt performance of his career 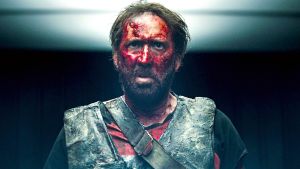 Nicolas Cage: his final scene will leave you reeling

What might Gerald Potterton’s Heavy Metal look like to someone confined at a black-ops site, the hood recently pulled off their head after many months of sensory deprivation? If Nic Cage’s big and internet-loved performance in Wild at Heart was assuaged with heroic quantities of drugs, what might it look like? Mandy, the new film from Panos Cosmatos, contains the answers to these, and other, pressing questions.

This extraordinary film exists entirely and absolutely in a universe in the same way that only certain discombobulating sui generis films can: Q the Winged Serpent, Martyrs or Beyond the Black Rainbow, also by Cosmatos, a cult favourite that deserves a wider audience.

There is nothing that isn’t brilliant, immaculately judged, and unhinged about Mandy. It opens with a spectacular 1980s font that reads Shadow Mountains 1983 AD. It feels the need to tell you AD – and to splice in some Ronald Reagan denouncing abortion on the radio, because where we are going is so far off grid, you need to cling to that detail like an unshared door in James Cameron’s Titanic.

Ostensibly, this is a movie in which logger Red (Nicolas Cage) exacts a terrible (but appropriate) revenge against a Manson Family-alike religious cult and their cannibal biker colleagues from hell after they have abducted his girlfriend, Mandy (Andrea Riseborough).

Any summary, however, ignores the incredible textures in the film. Cheddar Goblin Macaroni, anyone?

Riseborough, one of the most versatile performers of her generation, gifts meaning and nuance to an early, still edgy Motley Crüe T-shirt, the sci-fi landscapes that her character paints, and to the mysterious fantasy novel (called Seeker of the Serpent’s Kiss) she reads from. Over the course of the film, she breaks your heart over and over.

There are hints at past trauma but Red – who is, with Chekhovian poignancy, introduced with a chainsaw in his hands – and Mandy live an idyllic, romantic life before she is singled out by hippy cult leader Jeremiah (Linus Roache) as an object of desire.

At one level, what follows is a classic revenge cycle, but it spits everything you know about that genre back in your face. Even the one-liners are slanted and quasi-mystical: “The psychotic drowns where the mystic swims. You are drowning, I am swimming.”

Jeremiah’s cult features Ned Dennehy and the awesome Olwen Fouéré, who turns what might have been a “Jesus freak” minion into a gaping emotional wound.

The film is characterised by outlandish spectacle: a subhuman monster with a knife for a penis, barbed-wire restraints, drugs administered via scorpion

It’s fascinating to observe Cage snake his way in and around the 1980s largesse of the project. The actor has expressed his dislike for Cage Rage memes, but post-Mandy, he ought to expect a good deal more of them. His anguish keeps step with the audacity of a project characterised by outlandish spectacle: a subhuman monster with a knife for a penis, barbed-wire restraints, drugs administered via scorpion.

But between the madness, the actor somehow gives the most varied, heartfelt performance of his career, as he segues from blood-drenched mania into numb grief. His final scene will leave you reeling, and not for the reasons you might expect.

The tech specs, including Benjamin Loeb’s saturated cinematography and one of the final scores written by Icelandic composer, Jóhann Jóhannsson, are as striking as the performances.

The purple lettering may read 1983 AD, but this is very much a 2018 film, with all our era’s horrors and inadequacies and injustice exposed, writ large and remedied only by a retreat into fantasy. As Roache’s creepy man-child leader has it: “You’re a special one, Mandy.”