Why ‘Venom’, a stupid film about a monster, has killed ‘A Star Is Born’ at the box office 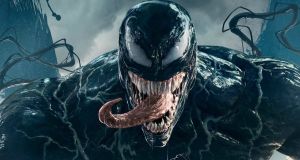 Venom: ‘Dumber than a sack of dead fish’

I was keener on Venom than most of my fellow critics. The comic-book adaptation – featuring Tom Hardy as a journalist infected by a symbiotic life form – is certainly dumber than a sack of dead fish, but it had an unpretentious oomph that contrasted pleasingly with larger, more pompous Marvel entertainments.

It was still a bad film. If you picked it up and examined its bottom you’d find the “trash” symbol among its hallmarks. Venom duly picked up stinky reviews – tellingly embargoed until day of release – and went into the market place opposite the hugely well-received A Star Is Born.

You hoped Tom Hardy had put a maths book down his trousers. Right? Because Venom was sure to get a caning at the box office. Right?

That’s not quite how things worked out. The stupid film about the big fanged hybrid annihilated the beautifully made musical about the drunk and the Gaga.

Oddly, nobody at Warner Brothers, the studio behind Star, was weeping into their beer. Indeed, its $41 million opening in the United States was somewhat ahead of the studio’s own predictions. That was the tenth highest opening ever in October.

As Einstein would tell you, everything is relative. Venom took in around $80 million to score the biggest ever opening for the tenth month of the year. There’s more. It’s closest competitor in that historic race, Alfonso Cuaron’s Gravity – a genuinely good film that won the best director Oscar – was behind by a full $20 million.

Is the moral here that a film’s quality has nothing to do with its takings? After all, Michael Bay’s endlessly cacophonous Transformers films have taken a total of $4.3 billion at the world’s box office. You read that right. There are around 7.7 billion people in the world. That’s over 50 cent per person. And I see them for free.

The truth is a little more encouraging. Obviously, that difficult film about the Russian nun having a crisis of conscience while on retreat on a bleak mountainside is never going to take killer-robot money.

But we have, in recent years, seen good – and sometimes excellent – popular cinema get its deserved rewards. Nobody had much hope for the Paddington films. The people who loved the books as children were either dead or too old to have little ones of their own. Even the BBC adaptation had faded a little into the mists of obscurity.

When a disappointing trailer arrived – too Uncanny Valley for comfort – the prognosticators wrote the poor thing off for good. But the sheer quality of the eventual film managed to win over lazing Christmas punters. An equally brilliant sequel established Paddington as a franchise for the ages (even if it did less well in the US).

The most successful film of 2016 in many territories – Ireland among them – was Bridget Jones’s Baby. Dedicated fans of the series were always going to return for the delayed third episode, but the film’s staying power confirmed that the word was good.

Crap films that make money tend to make a huge proportion of that haul on the opening weekend (before anyone finds out how bad they are). Films in the ho-hum DC universe – Batman V Superman, Justice League – generally open hugely and then fall precipitously away. The only real exception was the one genuinely enjoyable DC film: Wonder Woman ran and ran and ran.

There is, in short, still some reward for making a decent film. You are better off making a good dumb film than a bad dumb film. Sadly, Venom proves that, with the right property at the right time of year, bad dumb stuff still can sell.

One banal explanation is that there is little else in the cinema for a certain class of undemanding teenager. There was some gossip that, like Deadpool, the film would pick up a tough R cert in the US, but the film-makers decided to play safe and deliver a PG-13 picture. Fewer decapitations. More high school students. What else are they going to line up for?

The Predator is leaving cinemas. Aquaman hasn’t got here yet. Add in the ludicrously over-the-top visuals, the promise of gruff Tom Hardy and connections to the Spider-Man franchise (Venom is essentially an evil Spidey). Now you’ve got something you can properly flog.

A Star Is Born will be in cinemas long after Venom has vanished. Films that play to older audiences hang around just that bit longer. But it probably won’t catch its less idiotic rival. It would be wrong to say there’s no justice in the world, but there’s not enough of it.